“They’re Throwing Things at the Wall”: Faced with Manafort and Cohen Convictions, the Right Melts Down

Left, by Zach Gibson; right, by Mark Kauzlarich, both from Bloomberg/Getty Images.

Just hours after Michael Cohen, Donald Trump’s former personal lawyer, pled guilty to violating campaign-finance law on behalf of an unnamed political candidate in 2016, and Paul Manafort, his former campaign manager, was convicted of eight counts of financial fraud, Trump was firmly ensconced in the safe space of a political rally in West Virginia, greeted by comforting chants of “Lock her up!” For the next few hours, the president studiously avoided mentioning the two men who may very well have thrown his political future into jeopardy, freewheeling instead about “no collusion” before a crowd that would accept—and even repeat—virtually anything he said. Yet even as the president pontificated, his right-wing allies found themselves in the uncomfortable position of being forced to fill his silence. Blindsided by not one, but two damning convictions, they did the only thing they could: everything. “There are a lot of lines of defense that are being wheeled out right now,” Right Wing Watch’s Jared Holt observed to me. “It feels very much like throwing things at the wall and seeing what sticks.”

On cue, the right’s public-facing side pulled out every single pro-Trump defense it had concocted over the past two years. Within an hour of the verdicts breaking, The Five’s Greg Gutfeld was aggressively dismissing Cohen and Manafort as “two men who most Americans don’t know their names.” Fox Business’s Maria Bartiromo went after Hillary Clinton, saying Tuesday morning that Robert Mueller’s probe had no legitimacy unless the former Democratic presidential candidate was likewise investigated for the infamous Steele dossier. A shrewder group of Republicans converged on the seeming lack of Russia-related convictions in the Manafort trial, putting their disavowals on hold: “Thus far, there have yet to be any charges or convictions for colluding with the Russian government by any member of the Trump campaign,” Senator Lindsey Graham said in a statement, in one of the more measured defenses coming out of the Republican Party. The line made its way into the official G.O.P. defense, according to notes that a surrogate texted to reporter Josh Dawsey.

A less artful group of Trump supporters deployed a different line of logic: if the Manafort convictions carried no mention of Russia, then the media’s Russia-meddling narrative was, ipso facto, false, and Trump was therefore innocent (never mind the fact that a second Manafort trial, centering around the former G.O.P. operative’s extensive work in Russia and the Ukraine, is set to begin in D.C. in less than a month). “So all this legal activity strange I see no ‘Russian collusion’ in any breaking news,” tweeted Matt Schlapp, chairman of the American Conservative Union and the husband of White House communications director Mercedes Schlapp. “Odd.” Still others, said Holt, went further off the deep end, asserting that the Justice Department was being “run as part of a conspiracy theory,” and the trial wasn’t proof of the “Russian hacking narrative’s” veracity.

Almost simultaneously, a large segment of Trump’s diehard, MAGA-oriented allies began pushing the story of Mollie Tibbetts, a college student who was allegedly murdered by an undocumented immigrant. The lead story on Fox News’s home page was dedicated exclusively to the case, as was Breitbart’s, while MAGA wunderkinds Charlie Kirk, Candace Owens, and Tomi Lahren all tweeted that Tibbetts’s story ought to be top-line news, and lamented the “liberal media’s” preoccupation with Manafort and Cohen.

Fox and Friends simply ignored the convictions altogether in favor of discussing Tibbetts, along with kneeling N.F.L. protesters, and Andrew Cuomo’s recent gaffes. Though the outpouring could be read as spontaneous, it could not have come at a more convenient time—as former speaker Newt Gingrich put it to Axios, “If Mollie Tibbetts is a household name by October, Democrats will be in deep trouble. If we can be blocked by Manafort-Cohen, etc., then G.O.P. could lose [the House] badly.”

Behind the scenes, Republicans reportedly wrung their hands, increasingly concerned that the two cases, and Cohen’s in particular, could herald the president’s doom. “The verdict in the Manafort trial isn’t nearly as worrisome to me as the Cohen agreement and the Cohen statement,” former Trump adviser Michael Caputo told Politico. “It’s probably the worst thing so far in this whole investigation stage of the presidency.” “There was political momentum building to wrap up the Mueller probe soon,” a former administration official fretted to the outlet. “At the very least, in the short term, these two developments will pretty significantly bolster the office of the special counsel and people’s perceptions of it.” The perception, it seems, is widespread:

Nearly a dozen people close to the president, including current and former White House aides, acknowledged that Tuesday was one of the darkest days of Trump’s year and a half in office. And they worried that the revelations—even if they are unrelated to allegations of collusion with Russia—could lend new credence to the Mueller probe, even after the president’s allies spent months undercutting public faith in the investigation.

A close Trump friend confessed to Axios that they are “a bit concern[ed] about what he would do fully backed into a corner.” And a “usually buoyant outside West Wing adviser” read the tea leaves, noting, “Booming economy, robust bull market, troops in harm’s way but not in a large-scale war. And yet the president is enmeshed in a series of scandals and controversies . . . and that is before the Dems in the House start with the investigations.”

But by Wednesday morning, the G.O.P.’s fearless leader had returned from West Virginia and thrown himself back into the fray, making it clear what he wanted his followers to do: hail Manafort as a “brave man” who escaped 10 counts but fell victim to the Russia “witch hunt;” and jeer Cohen, the bad lawyer who pled guilty to things that were “not a crime.” “Whenever Trump tweets out what could be perceived as the official response, that tends to take over,” Holt said. “I wouldn’t be surprised to see if that becomes the primary line of defense.” 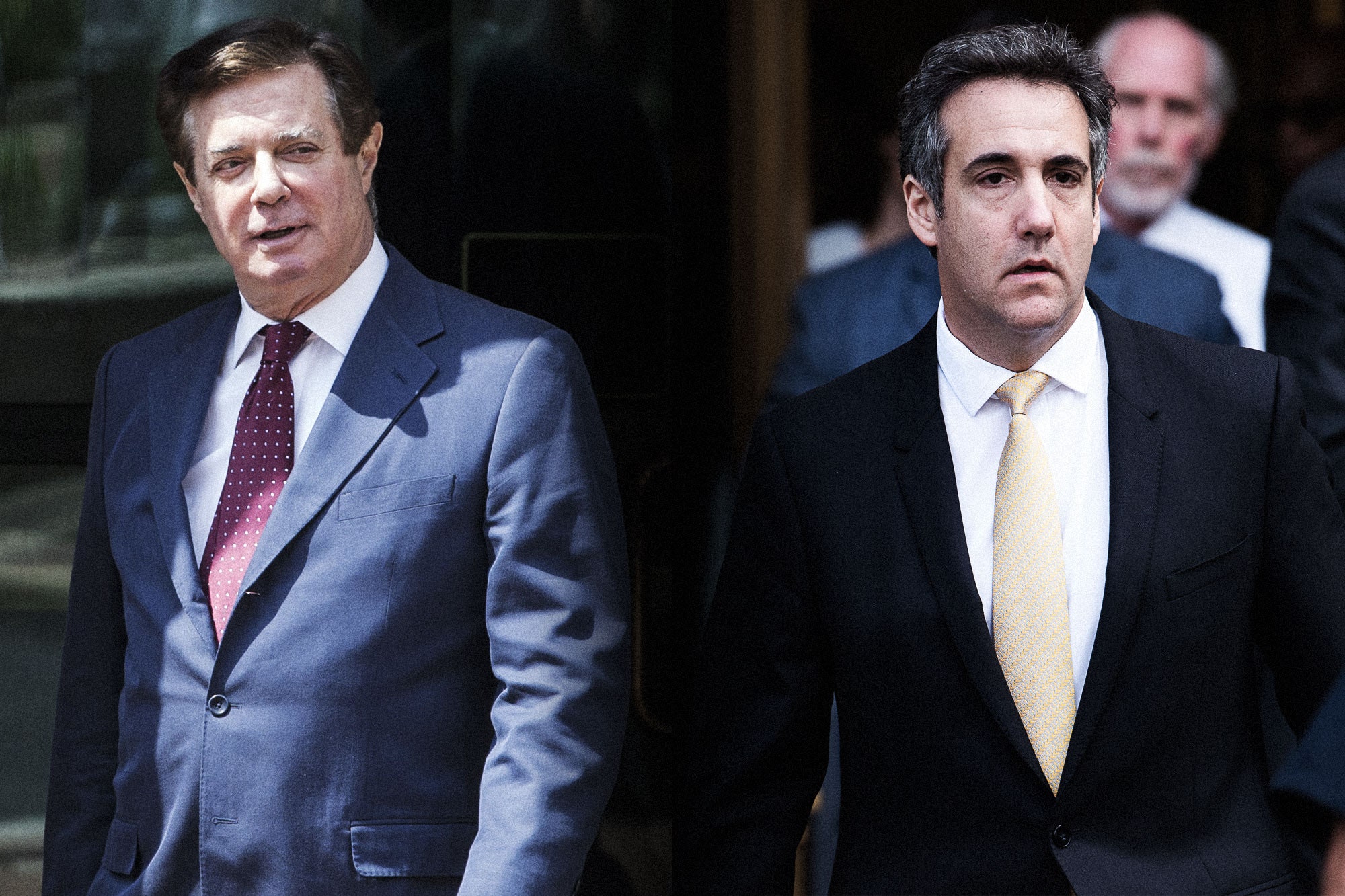