Beginning on election night 2020 and continuing through his final days in office, Donald Trump unraveled and dragged America with him, to the point that his followers sacked the U.S. Capitol with two weeks left in his term. This Axios series takes you inside the collapse of a president.

Episode 2: Trump stops buying what his professional staff are telling him, and increasingly turns to radical voices telling him what he wants to hear.

President Trump plunked down in an armchair in the White House residence, still dressed from his golf game — navy fleece, black pants, white MAGA cap. It was Saturday, Nov. 7. The networks had just called the election for Joe Biden.

In the Yellow Oval Room, the same room where FDR learned of the Japanese attack on Pearl Harbor in 1941, stewards brought hors d’oeuvres on trays while Trump gathered his closest political advisers to assess what options he had left.

Top aides including campaign manager Bill Stepien, senior adviser Jason Miller, conservative political activist and external Trump adviser David Bossie, and Justin Clark, the deputy campaign manager, leveled with him. As they saw it, he had one last long shot at victory. It would require them to win enough outstanding votes in Arizona and Georgia to squeak home in those two states, and to win a legal challenge to election practices in Wisconsin.

“You have a 5% to 10% chance of this happening,” Clark told the president. “But all of these things have to go right.” Trump listened calmly and told them their plan was worth a shot.

But it would never get off the ground. Plan B, driven by Rudy Giuliani and a parallel track of conspiracists, was already coming together, unfolding before the original advisers’ own eyes.

It would soon overtake the campaign’s legal operation, feeding the president false claims including the idea that the election could be overturned.

On the day after the election, Nov. 4, top staff including Stepien, Clark, Miller, general counsel Matthew Morgan and Jared Kushner had gathered at Trump campaign headquarters in Arlington, Virginia. They believed this would be a serious search for a path to 270 electoral votes through credible legal challenges.

Then Giuliani, Sidney Powell and a swelling conspiracy crew marched into the room — literally.

These two groups — the professional staff and the Giuliani cabal — filled in around one long, rectangular table in a conference room walled in by frosted glass. The pattern repeated itself the day after that and the day after that.

A bizarre routine set in. These meetings would begin with official staff raising plausible legal strategies. Then Giuliani and Powell, a lawyer with a history of floating “deep state” conspiracy theories, would take over, spewing wild allegations of a centralized plot by Democrats — and in Powell’s view, international communists — to steal the election.

Bewildered campaign aides would look around the table at one another, silently asking what the hell was going on. One would invariably shuffle out of the room, followed by another a few minutes later. Then another. Then another. The professional staff would reconvene in Stepien’s office, about 20 yards down the hall.

Eventually, Giuliani would realize that he and his crew were alone in the conference room. He’d walk down the hall and knock on the glass outside Stepien’s office, where about eight aides had squeezed onto a pair of couches. “You guys, where did you go?” Giuliani would say. “This is serious!”

Asked to provide comment on this reporting, which was confirmed by two sources in the room, Powell said in an emailed statement to Axios: “Your story is materially false, but I’m sure the ‘elitist and consultant class’ that make millions of dollars lying to the American people are behind it and will push that propaganda.” Giuliani did not respond to a request for comment.

Officials including Clark, Morgan and Bossie, who played a key role in Trump’s 2016 victory, spent many hours trying to stop the former New York mayor from running to the press or the president and muddling the campaign’s legal approach. But they were outmatched, and Trump was tweeting his own spiraling conspiracies.

The numbers in Pennsylvania and Georgia kept getting worse. Top officials knew the election was getting away from them. Even the Giuliani-free meetings were overcome with paralysis.

The White House became a strange ghost town in the days after the election. Trump’s schedule — already unstructured — became more so. It was impossible to shift his focus from his grievances about the election to important policy matters. In conversations in the Oval Office, Trump would occasionally slip and seem to acknowledge he lost saying, “Can you believe I lost to that fucking guy? That fucking corpse?”

Most in the West Wing, including chief of staff Mark Meadows, understood that Trump had lost. But nobody confronted him directly with that unpleasant news. Instead many on the staff chose to avoid him.

Some of the senior staff argued that Trump should spend this post-election period claiming credit for the GOP’s strong congressional performances in the elections and to burnish his legacy, by talking about his achievements in office and the pace of the Operation Warp Speed vaccine development. But Trump wouldn’t allow his team to move on. To be around him meant you had to accommodate some measure of denial.

Senior White House staff and health officials maintained a standing 9 a.m. “COVID huddle” in the Roosevelt Room. They talked through the vaccine rollout, which would continue into 2021. Left unsaid was that they had lost the election and wouldn’t be around to see it fully through. Aides could only discuss the reality of Trump’s loss in more private settings.

Trump’s closest aides said they wanted to give him space to experience all the stages of grief. But he rarely made in past the denial stage. And many of his aides made themselves scarce, worried that if they found themselves in the Oval Office they could be sucked into conversations that could force them to incur hefty legal bills down the track.

Trump’s most devoted aides did whatever they could to buck up his spirits, even if it meant indulging his delusions. Sometimes it was hard to tell if they were humoring Trump or had tipped over into fantastical thinking themselves. In late November, the head of the Presidential Personnel Office, Trump’s former body man John McEntee, told colleagues they ought to get together to discuss second-term priorities. Not many were enthusiastic.

Biden was declared the winner of Arizona on Nov. 12, by more than 11,000 votes, a margin that was uncatchable. At that point, the core campaign team told Trump his pathway was dead. In retaliation, Trump stopped listening to them. Giuliani was gaining influence, speaking directly with the president and demanding to be put in charge.

On Nov. 13, Clark was in the Cabinet room of the White House with Stepien, Miller and campaign aide Erin Perrine for a meeting on communications strategy when deputy chief of staff Dan Scavino summoned Clark into the Oval Office to settle a legal question.

Trump had Giuliani on speakerphone, and Giuliani, seemingly unaware of Clark’s arrival, was trashing the campaign staff’s legal strategy in Georgia — and floating a debunked conspiracy theory about rigged Dominion voting machines.

“Hey, I’ve got Justin in here,” Trump interrupted. “What do you think, Justin?” Clark laid out the legal process in Georgia and told the packed Oval Office that Georgia state law barred requesting a recount until after an election is certified.

The following night — without notifying his campaign staff — Trump tweeted that he was putting Giuliani in charge of his legal challenges, along with pro-Trump lawyers Powell, Joseph diGenova, Victoria Toensing and Jenna Ellis.

Republican National Committee officials were not happy about this. They rejected a request to fund TV commercials claiming the election was “stolen.” But they greenlit a press conference on Nov. 19, a debut for the new legal team.

It played like a B movie. Black sweat, apparently from hair dye, rolled down Giuliani’s face as he rambled about a supposed Democratic conspiracy to rig the vote in major cities. Powell, once a respected federal prosecutor, alleged an international communist plot by Cuba, China, Venezuela, George Soros, and the Clinton Foundation.

Senior party officials were mortified but felt helpless. This was the Giuliani show now. The barbarians were in the Oval. The rest of the Republican Party was just along for the ride.

About this series: Our reporting is based on interviews with current and former White House, campaign, government and congressional officials as well as eyewitnesses and people close to the president. Sources have been granted anonymity to share sensitive observations or details they would not be formally authorized to disclose. President Trump and other officials to whom quotes and actions have been attributed by others were provided the opportunity to confirm, deny or respond to reporting elements prior to publication.

“Off the rails” is reported by White House reporter Jonathan Swan, with reporting and research assistance by Zach Basu. It was edited by Margaret Talev and Mike Allen. Illustrations by Sarah Grillo, Aïda Amer and Eniola Odetunde. Our podcast on the series is called “How it happened: Trump’s last stand.” 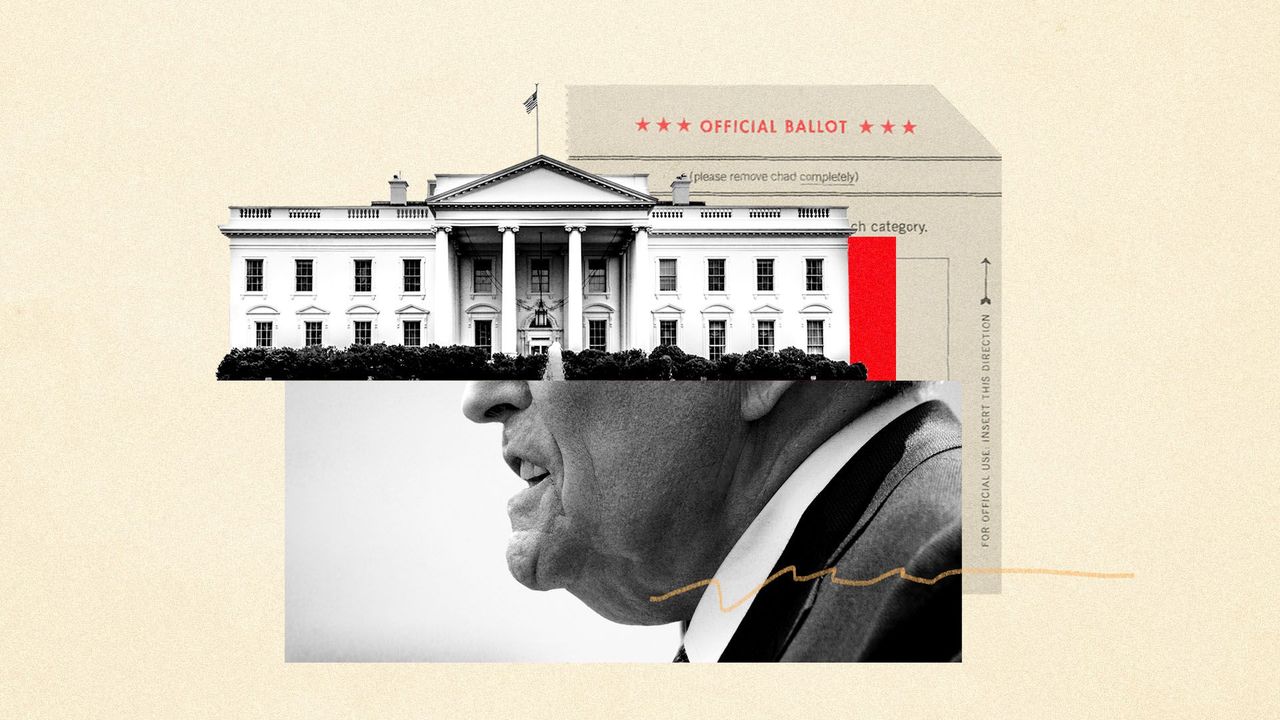