Off the rails: Trump’s premeditated election lie lit the fire

Beginning on election night 2020 and continuing through his final days in office, Donald Trump unraveled and dragged America with him, to the point that his followers sacked the U.S. Capitol with two weeks left in his term. Axios takes you inside the collapse of a president with a special series.

Episode 1: Trump’s refusal to believe the election results was premeditated. He had heard about the “red mirage” — the likelihood that early vote counts would tip more Republican than the final tallies — and he decided to exploit it.

“Jared, you call the Murdochs! Jason, you call Sammon and Hemmer!”

President Trump was almost shouting. He directed his son-in-law and his senior strategist from his private quarters at the White House late on election night. He barked out the names of top Fox News executives and talent he expected to answer to him.

“And anyone else — anyone else who will take the call,” he said. “Tell these guys they got to change it, they got it wrong. It’s way too early. Not even CNN is calling it.”

As the clock ticked over into the first minutes of Nov. 4, Trump’s lawyer Rudy Giuliani ranted to top campaign aides: “There’s no way he lost; this thing must have been stolen. Just say we won Michigan! Just say we won Georgia! Just say we won the election! He needs to go out and claim victory.” Trump’s campaign manager Bill Stepien later told associates: “That was fucking crazy.”

For weeks, Trump had been laying the groundwork to declare victory on election night — even if he lost. But the real-time results, punctuated by Fox’s shocking call, upended his plans and began his unraveling.

Trump had planned for Americans to go to bed on Nov. 3 celebrating — or resigned to — his re-election. The maps they saw on TV should be bathed in red. But at 11:20 p.m. that vision fell apart, as the nation’s leading news channel among conservatives became the first outlet to call Arizona for Joe Biden. Inside the White House, Trump’s inner circle erupted in horror.

Over the next two months, Trump took the nation down with him as he descended into denial, despair and a reckless revenge streak that fueled a deadly siege on the U.S. Capitol by his backers seeking to overturn the election. This triggered a constitutional crisis and a bipartisan push to impeach Trump on his way out the door, to try to cast him out of American politics for good.

But in four years, Trump had remade the Republican Party in his own image, inspiring and activating tens of millions of Americans who weren’t abandoning him anytime soon. He’d once bragged he could shoot another person on Fifth Avenue and not lose his voters. In reality, many of them had eagerly lined up to commit violence on his behalf.

As Trump prepared for Election Day, he was focused on the so-called red mirage. This was the idea that early vote counts would look better for Republicans than the final tallies because Democrats feared COVID-19 more and would disproportionately cast absentee votes that would take longer to count. Trump intended to exploit this — to weaponize it for his vast base of followers.

His preparations were deliberate, strategic and deeply cynical. Trump wanted Americans to believe a falsehood that there were two elections — a legitimate election composed of in-person voting, and a separate, fraudulent election involving bogus mail-in ballots for Democrats.

In the initial hours after returns closed, it looked like his plan could work. Trump was on track for easy wins in Florida and Ohio, and held huge — though deceptive — early leads in Pennsylvania and Michigan.

But as Bill Hemmer narrated a live “what if” scenario on his election telestrator from Studio F of Fox’s gargantuan Manhattan headquarters, the anchor sounded confused. “What is this happening here? Why is Arizona blue?” he asked on camera, prodding the image of the state on the touch screen, unable to flip its color. “Did we just call it? Did we make a call in Arizona?” Because of a minor communication breakdown, Hemmer’s screen had turned Arizona blue before he or the other anchors, Bret Baier and Martha MacCallum, found out that Fox’s Decision Desk had called it.

Trump was steaming and he wanted to see his top aides immediately. His son-in-law Jared Kushner, chief of staff Mark Meadows, campaign manager Stepien, senior strategist Jason Miller, and data cruncher Matt Oczkowski took the elevator up to the third floor of the residence at the White House. They met Trump and the first lady halfway between his bedroom and the living room at the end of the hall. Trump peppered them with questions. What happened? What the hell is going on at Fox?

Oczkowski told Trump that based on the campaign’s modeling he thought Fox was wrong and “we’re going to narrowly win” by maybe 10,000 votes or less, “razor close.” But the reality was, hundreds of thousands of votes were outstanding in Maricopa County and the picture was too cloudy to be sure. Then Trump told Kushner to call the Murdochs.

The team had been cautiously optimistic that they were watching a repeat of Trump’s poll-defying 2016 victory. In the West Wing, mid-level staffers congregated in the hallways buzzing with nervous excitement and anticipation. At the residence about 200 guests — donors, Cabinet secretaries, White House physician Sean Conley, TV boosters Diamond and Silk, and other VIPs — gathered for the official election night party. They munched on beef sliders. Most did not wear masks. “You knew in real time that you were in a superspreader event,” said one attendee.

Giuliani was stationed at a table amid the party, laptop open, watching the results come in, as if he were Command Central. His son, White House official Andrew Giuliani, sat at his right. Trump’s tight inner circle — children Don Jr., Eric, Ivanka, plus his long-time adviser Hope Hicks, White House deputy chief of staff Dan Scavino and a few others — gathered separately in the Old Family Dining Room to watch the returns on TV. Trump’s core campaign team monitored precinct-level results from down in the Map Room on the ground floor, the same room where FDR had once tracked fighting during World War II.

Trump had spent a bellicose summer and early autumn railing against mail-in ballots. After a toxic Sept. 29 election debate with Biden, Trump’s internal poll numbers nose-dived. He started choreographing election night in earnest during the second week of October, as he recovered from COVID-19.

His former chief of staff Reince Priebus told a friend he was stunned when Trump called him around that time and acted out his script, including walking up to a podium and prematurely declaring victory on election night if it looked like he was ahead.

White House senior policy adviser Stephen Miller’s speechwriting team had prepared three skeleton speeches for election night for all the possible scenarios: a clear victory, a clear loss, and an indeterminate result. But the speechwriters knew that if Trump was facing anything other than a resounding victory, the words would be his alone. This president would never admit defeat or urge patience.

Making the situation even more awkward, several high-profile Fox News personalities, including “Judge” Jeanine Pirro, were at the White House while their own network spoiled what was supposed to be a victory party.

It was shortly after 1 a.m. on Nov. 4 when Trump finally came down from his living quarters to the main corridor on the second floor of his private residence. His inner circle met him halfway. This was the first time most of them had seen the president that night. About a dozen aides and relatives huddled around Trump as he dictated an improvised speech. Stephen Miller sat on a couch furiously typing the president’s stream-of-consciousness thoughts. Aides rushed to print out screenshots of cable news graphics showing Trump’s illusory early leads in the key Midwest states. By 2 a.m., Trump wanted to know why he couldn’t he just say he had won and be done with it.

The speechwriters sent a draft to Trump’s longtime teleprompter operator, stationed at his laptop in a small room adjoining the East Room. The draft did not include the words that became the most infamous line of his speech: “Frankly, we did win this election.”

At 2:20 a.m., maskless aides and supporters in the East Room held up cellphones to record Trump, the first lady, Vice President Mike Pence and his wife walking out to waiting cameras as “Hail to the Chief” played. Dozens of American flags lined the backdrop behind them.

Trump declared victory — and announced that Democrats were perpetrating a giant fraud on the American people.

Both claims were lies.

About this series: Our reporting is based on multiple interviews with current and former White House, campaign, government and congressional officials as well as direct eyewitnesses and people close to the president. Sources have been granted anonymity to share sensitive observations or details they would not be formally authorized to disclose. President Trump and other officials to whom quotes and actions have been attributed by others were provided the opportunity to confirm, deny or respond to reporting elements prior to publication.

“Off the rails” is reported by White House reporter Jonathan Swan with reporting and research assistance by Zach Basu. It was edited by Margaret Talev and Mike Allen. Illustrations by Sarah Grillo, Aida Amer and Eniola Odetunde. Our podcast on the series is called “How it happened: Trump’s last stand.” 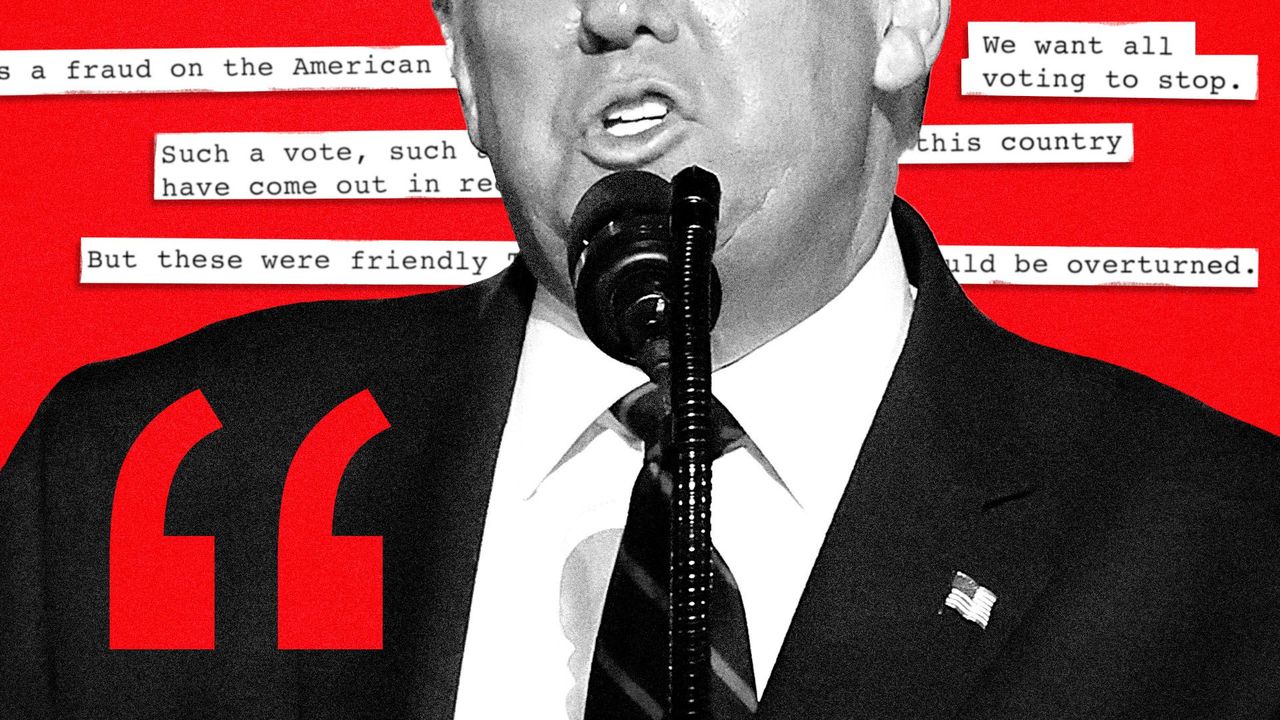