NextSome Lady Gaga fans are trying to sabotage Venom at the box office. Sure.
Global

Will the Left’s Fury Over Kavanaugh Cost Biden the Presidency?

Those seeking refuge from the words “Brett Kavanaugh”—who avoid the outdoors for fear of running into a neighbor with talking points—will find only partial relief in this space. Until this nominee is confirmed, something almost certain to happen over the weekend, all news and opinion journalism must relate to Kavanaughlia. Sorry, I don’t make the rules. But this also allows us to consider countless topics from a new angles, since the Supreme Court battle has to intrude into everything, even the marketing of vegan lipstick. One such topic: the fate of the old-guard liberal once in good standing. This figure still holds the reins of power throughout the Democratic Party, but the ride is getting rougher. And few are likely to feel this as keenly in 2020 as beloved old-guard liberal Joe Biden.

A spate of recent articles on Biden’s alleged transgressions may be a preview of what awaits him. To sum up what seems to be the prevailing liberal opinion on Biden these days, it’s that he’s a nice fellow who has the misfortune of harkening back to a benighted time, during which he was in on the misdeeds of old. He was a leader in writing and passing a 1994 crime bill that, in the view of countless critics, ushered in an era of mass incarceration. More important, he was chairman of the Senate Judiciary Committee when Anita Hill, in 1991, testified that Clarence Thomas had harassed her sexually when she worked for him in the 1980s. For this, Hill endured nasty questioning, accusations of perjury, and general character assassination. People suggest this is why he has been so silent, relative to peers, on the confirmation of Brett Kavanaugh. His time is past, and, at this point, say his critics, it should be.

Focusing on moments in history can blind us to its trends. For all the political swings of the past decades, from Carter to Reagan to Clinton to Bush, our broader culture has been dominantly liberal, and the push has been toward emancipation. It’s already 46 years ago that the Equal Rights Amendment passed Congress, and arguments against its ratification tended to be about means rather than aim. Anti-racism has been a foundational value in our educational system for just as long. The emancipatory trend has played out slowly, but it has not reversed. Compare the mores of the corporate world in 1978 to those of 1988, 1998, 2008, and 2018. This has been the ethos that shaped the young Joe Biden, and its evolution has been his evolution, for politicians are attuned to societal sentiment.

People may deplore how Anita Hill was treated in 1991, but many forget that her appearance before the committee in itself marked a major cultural shift. For the first time, a woman in the national spotlight in the halls of Congress was giving voice to a problem that countless others like her had had to confront in their workplaces. Americans had heard of sexual harassment, of course. Training programs on proper relations between the sexes had already become widespread in large organizations across the country, and the offices of the 1980s looked nothing like those of the 1970s, to say nothing of the 1960s. But it wasn’t a news item, and the term “sexual harassment” was still novel enough that people joked about not knowing which syllable of “harassment” was proper to stress. When Joe Biden invited Hill to testify, he wasn’t trying to shut down her concerns. He was trying to bring them into the light.

Today, people knock Biden for having failed to call up more witnesses. Or for having expressed sympathy for both Thomas and Hill. Or for not reining in Republicans on the committee when they were hurling imprecations at Hill. But Biden seems to have tried to call in more witnesses, facing opposition from fellow senators and from the witnesses themselves. (Note this letter from Biden to a witness in 1991, in which Biden releases her from the obligation to testify in person before the committee but notes that, if she wishes to do so, “I will honor that request.”) As for expressing contingent sympathy to both accuser and accused, it wasn’t controversial at the time, and Democrats like Kamala Harris might be misjudging the effects of aiming for the opposite effect today. Biden, of course, was forced, like all of us, to listen to Republicans as they attacked Hill, but that’s how committee hearings go. Senators use their time as they will. Biden himself was never discourteous.

As for crime bills, people criticize Biden for having overseen a set of laws that sent a lot of people, especially African-Americans, to prison. But the accusation is only partly true, and certainly misleading. The crime bill of 1994 did a lot of things that liberals wanted. It banned the manufacture of assault weapons, allocated over a billion dollars to combat violence against women (in the Violence Against Women Act), expanded privacy provisions for driver’s license holders, created a sex-offender registry, and created grants for community policing. But every bill involves compromises and tradeoffs, and every politician has to decide if the goods outweigh the bad. Provisions that are now widely felt to have been misused, such as life imprisonment for those who convicted for the third time of a violent crime, were part of the bad that went with the good.

Furthermore, crime is tricky. It’s an area in which one liberal value (we mustn’t be lock-’em-up types) conflicts with another (we mustn’t let bad guys get away with it anymore), and it leads in unpredictable directions. Today, a campaign to remove a judge for leniency is likely to be come from the left in response to a light sentence for a sexual offense. Such protesters might be right about the injustice, but they’re not reducing incarceration. In the bigger picture, the push for more softening of the criminal-justice system today is in response to a toughening of the system in the 1990s that in turn was in response to a softening of the system in the 1960s. Crime goes up, and people demand harsh countermeasures. Then crime goes down, and people deplore the harsh countermeasures that lowered it. We’re likely to see the cycle repeat itself.

So, no, Biden ought not to suffer for past wokeness deficiencies. He has many liabilities, but insufficient concern for social justice, or “social justice,” doesn’t belong among them. In the world of politics, though, ought and is can be especially far apart. Public figures are subject to brutal shorthand. “Acid, amnesty, and abortion” was the infamous tag that clung to George McGovern in 1972, and, compared to others of its sort, that attack was almost nuanced. Biden, like all politicians, will be subject to such forces no less than any other politician. And we can picture the nonsensical shorthand of sharp-elbowed campaigning: Joe Biden sent black people to prison and bullied Anita Hill. Since Biden is gentleman enough to have expressed regret over being unable to help Hill more, opponents in a tight race would point to this as proof of Biden’s vices: You yourself admit to treating Anita Hill so badly that you had to apologize to her!

If all of this turns out to be enough to cause Biden to pull back from a run in 2020, it would probably spare him other worries. He has some fairly serious vulnerabilities as it is: a record of pandering to predatory credit-card issuers; a very weird episode of plagiarism; a tendency toward babbling and muddled thinking; and, above all, old age. These are serious drawbacks in a president, as we’re already seeing in the current Oval Office occupant, who shares more than a few of them himself. But it’s telling that these are viewed as secondary in the eyes of much of the Democratic base, and it speaks to a fundamental change in the Democratic Party on which people are still trying to get a handle. In less than a month, we’ll start to see how well it’s working. 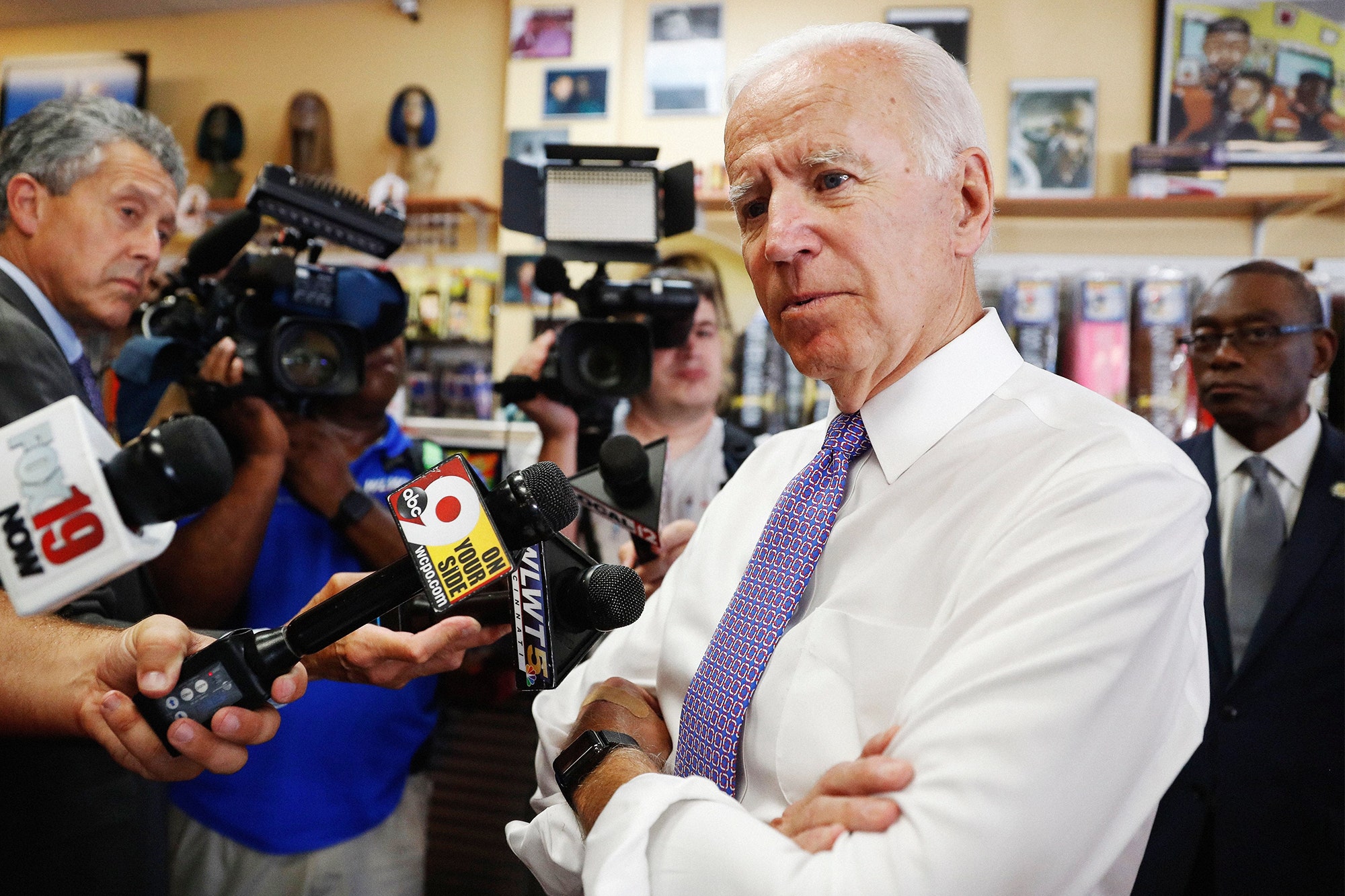 Netanyahu’s ceasefire is meant to keep Gaza imprisoned
On Education: An Interview with David Gilbert and Jalil Muntaqim
Sleeping on the clock is no dream
Stand up to the Proud-of-their-hate Boys
Faraday Future CEO’s long trail of debt is finally catching up to him
Properties Are Still Being Sold for Cryptocurrency Despite the Bear Market
Spread the love

Cactus the dog is running one of the toughest races on earth in Morocco
Hospitals are learning from industry how to cut medical errors
WNYC hosts Israeli rabbi who is optimistic about new nation-state law
Body of crucified criminal was put on public display in Saudi Arabia following 37 executions
What do socialists mean by socialism?
Trump Says Football Is Too Rough for Barron, Too Soft for America