The Biden era in Washington got under way on Tuesday morning, with a Senate confirmation hearing for Janet Yellen, the President’s pick for Treasury Secretary. The seventy-four-year-old former chair of the Federal Reserve embodies the incoming Administration’s combination of experience and center-left policy views, and when she is confirmed—her nomination isn’t in any doubt—she will also make history twice over. As the first woman to have held either of the two highest economic offices of state, she will have broken more than one glass ceiling.

As expected, the hearing before the Senate Finance Committee was a well-mannered one. In addition to her service at the Fed, which she led from 2014 to 2018, Yellen’s résumé includes a stint as a top White House economic adviser to President Bill Clinton. “This is a person who has been confirmed again, and again, and again,” Senator Ron Wyden, of Oregon, who will take over as head of the committee on Wednesday afternoon, noted toward the end of the hearing. He said that he would like to put Yellen’s nomination to a full vote of the Senate as early as Thursday. The incoming ranking Republican on the committee, Senator Mike Crapo, of Idaho, said that he and his colleagues would “work expeditiously” on the matter.

In policy terms, the hearing provided a fascinating glimpse of what Washington politics will be like post-Trump. For the foreseeable future, three topics are set to dominate the agenda: the coronavirus, spending and taxes, and China. Donald Trump’s legacy will color all of these, but in different ways. As Yellen’s testimony made clear, the immediate task facing the new Administration is fixing the mess that the departing President made of the pandemic. But the upcoming tussle over Joe Biden’s proposal to spend another $1.9 trillion on COVID relief will also demonstrate the Democrats’ ability to address some of the underlying economic inequalities that helped give rise to Trumpian populism—and reveal whether the establishment G.O.P. aims to return to some of its pre-Trump roots. At the same time, a bipartisan focus on confronting China will serve as a reminder that at least part of Trump’s policy legacy will live on, although the measures used to address the relationship between the two countries may change.

With the coronavirus still racing across the United States, and with new claims for unemployment benefits rising sharply, Yellen made the common-sense Keynesian argument that a further burst of government spending is needed to alleviate human suffering, shorten the recession, and head off long-term “scarring” to the economy. Senator Chuck Grassley, the outgoing Republican chair of the committee, dismissed the Biden package, which includes expanding child tax credits and raising the minimum wage to fifteen dollars an hour, as a “laundry list” of liberal proposals. Other Republicans on the committee pressed Yellen on whether Biden’s proposal to give an additional cash payment of fourteen hundred dollars to households that earn up to a hundred and fifty thousand dollars a year, even those that haven’t suffered any income losses, was well-targeted.

In an exchange with Senator Bill Cassidy, of Louisiana, Yellen conceded that some people who don’t need additional cash payments might receive them. But she also pointed out that many families “are bearing exceptional financial burdens” if, for example, one of their members has had to give up work to look after children or elderly relatives. Yellen also delivered a spirited defense of other items in the Biden package, including expanding and extending unemployment insurance, boosting food-stamp programs, and raising refundable child tax credits to three thousand dollars a year—a set of proposals that would reduce the incidence of child poverty by half, according to a study by Columbia University’s Center on Poverty and Social Policy. Under the current system, the child tax credits, which translate into cash payments for people with low taxable incomes, are paid out annually and retrospectively. Responding to Senator Michael Bennet, Democrat of Colorado, Yellen said that she would ask the I.R.S. to look into sending poor families a monthly check, which could make a huge difference to their budgets.

Eventually, the new Democrat-controlled Congress will surely agree on some sort of additional relief package, but the G.O.P. is clearly intent on cutting it down and eliminating items that aren’t directly tied to the pandemic. With Trump gone, many old-school Republicans appear ready to revive the old-time conservative religion of small-government and austerity economics. Taking up this line, a number of Republican senators pressed Yellen about her previous statements, many of which she made while she was at the Fed, about the need to keep federal spending and federal debt on a sustainable course. “When is it too much?” Senator John Thune, of South Dakota, asked.

In response, it would have been well within Yellen’s rights to point out what sort of manure her interlocutors were stuffed with, given their actions in the past. After all, many of them voted for the 2017 tax bill, which, according to the Congressional Budget Office, will increase the budget deficit by $1.9 trillion over ten years, and, before that, for the costly tax cuts of George W. Bush. Confrontation isn’t Yellen’s thing, though; economic reasoning is. “Senator, I agree with you that it’s essential that we put the federal budget on a path that is sustainable . . . but the most important thing, in my view, that we can do today to put us on a path of fiscal sustainability is to defeat the pandemic,” she said to Thune. A failure to spend enough to revive the economy would “likely leave us in a worst place fiscally and with respect to our debt situation,” Yellen added.

The topic the Republicans seemed most exercised about was the prospect of the new Administration reversing some of the tax cuts that they and Trump had showered on large companies. The 2017 tax bill slashed the corporate tax rate from thirty-five per cent to twenty per cent; Biden campaigned on moving it back up to twenty-eight per cent. Yellen pointed out that the new Administration would need additional tax revenues to finance its plans to boost public investment in infrastructure, employee training, and scientific research and development, which she rightly cited as essential factors in long-term growth. But the incoming Treasury Secretary also assured the Republicans that this longer-term agenda wasn’t an immediate priority. “The focus right now is on providing relief, and on helping families keep a roof over their heads, and food on the table and not on raising taxes,” she told Senator Steve Daines, of Montana.

A number of senators from both parties brought up the subject of China, which Steven Mnuchin, Trump’s Treasury Secretary, spent a great deal of time on. “We all understand that China cheating is taking a huge toll on our workers and particularly creating more high-paying jobs,” Wyden said, starkly. “What do you believe you can do?” Yellen, who appeared to be testifying from her living room, initially responded with diplomatic language, describing China as “our most important strategic competitor.” Then she spoke plainly, saying, “We need to take on China’s abusive, unfair, and illegal practices.” (In listing them, she mentioned stealing intellectual patents, creating trade barriers, and forcing companies that invest in China to transfer their technology.) Later in the hearing, Ben Sasse, the Nebraska Republican, moved the discussion beyond economics and asked Yellen if she believed that the government of Xi Jinping was guilty of genocide in its treatment of the Uighurs. “I think it’s guilty of horrendous human-rights abuses, yes,” Yellen replied.

For Yellen, who was an academic economist for many years, this exchange was a reminder that, as Treasury Secretary, she will need to operate effectively in the highest echelons of politics and diplomacy, as well as provide a lead on economic policy. For the rest of us, the hearing was a reminder that Trump has left huge issues unresolved. The pandemic’s economic damage is one of them. China is another.

Read More About the Presidential Transition 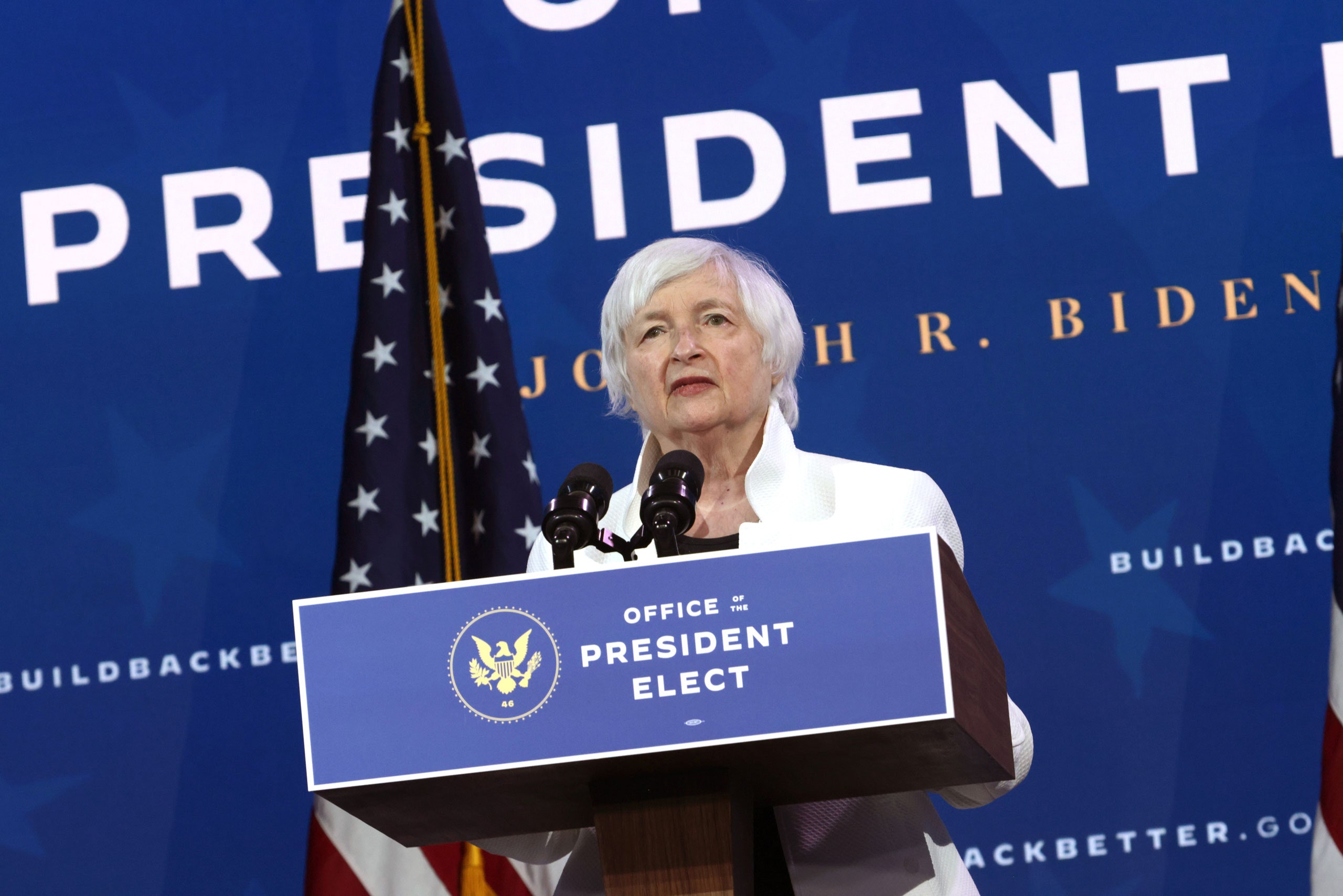