Princess Haya Bint al-Hussein has been seen for the first time today since fleeing Dubai for the UK as she arrived at court in London for a hearing over her children with Sheikh Mohammed al-Maktoum.

The princess, 45, left the Dubai ruler, 70, in June and was reported to be ‘hiding in London in fear for her life’ following news of their divorce being announced.

She fled with the pair’s two children and initially sought asylum in Germany before going to her family’s £85million mansion in west London, where she has been ever since.

Today she was accompanied at the court by her legal team, including specialist divorce lawyer Fiona Shackleton, who handled Prince Charles’ split with Princess Diana. Experts say the couple could fight over £4.5billion which would make it among the costliest divorces in British legal history.

The exact details of today’s hearing have not been revealed but the former couple previously confirmed in a joint statement it would be related to their children and not their divorce or finances.

It comes after it was alleged the break-up followed ‘inappropriate contact’ between Princess Haya and her British bodyguard Russell Flowers.

Princess Haya Bint Al Hussein, right, pictured with her legal team including lawyer Fiona Shackleton, centre, has arrived at the High Court in London today for a hearing over her children

Ruler of Dubai Sheikh Mohammed al-Maktoum and estranged wife Princess Haya Bint al-Hussein, pictured together at Royal Ascot in 2013, have begun a High Court battle in the UK over their children ahead of their divorce

Princess Haya, right, fled Dubai in June with her two children by the Sheikh and legal experts predict they could battle for £4.5billion in a divorce, although today’s court hearing relates only to their children’s welfare

Following her disappearance, an angry poem allegedly written by the Sheikh was published on his official Instagram page accusing an unnamed woman of ‘treachery and betrayal’.

Princess Haya is the daughter of the former King Hussein of Jordan and half-sister of King Abdullah II of Jordan.

The princess graduated from Oxford University and is a former Olympic equestrian, representing Jordan at the 2000 games in Sydney.

She became the Sheikh’s sixth wife in 2004 and the pair share a love of horses. The billionaire Sheikh founded the Godolphin horse racing stables and is often seen at Royal Ascot with The Queen.

It is understood Princess Haya wishes to stay in the UK but if the Sheikh demands her return it could spark a diplomatic incident due to Britain’s close ties with the UAE.

She bought the Kensington mansion in 2017 from Indian billionaire Lakshmi Mittal.

The Princess recently moved into an £85million townhouse, pictured, which she bought from Indian billionaire Lakshmi Mittal in 2017

The princess allegedly fled Dubai because she ‘learned disturbing facts’ about the disappearance of one of her husband’s daughters, Princess Latifa.

Latifa, 33, was captured by commandos as she tried to flee to the US to begin a new life having claimed she had previously been imprisoned and tortured when she attempted to escape from Dubai as a teenager.

After being forcibly returned to Dubai she was not seen for nine months until Princess Haya arranged for her friend Mary Robinson, the former Irish PM, to meet with Latifa.

The staged meeting was condemned by human right groups who said Robinson had accepted the Dubai ruler’s version of events that she was the victim of an extortion plot rather than being held against her will.

Campaigners say she is drugged and held as a prisoner in her own home.

Princess Haya is said to have decided to flee when she learned the truth about Latifa and feared the same could happen to her if she remained in Dubai.

She has hired Fiona Shackleton to represent her in the proceedings – one of the UK’s top divorce lawyers who represented Prince Charles during his divorce from Princess Diana.

Sheikh Mohammed bin Rashid al-Maktoum is pictured here receiving a trophy from The Queen after one of his horses won the Diamond Jubilee Stakes at Royal Ascot in June 22, with his wife noticeably absent after previously frequenting the event with him 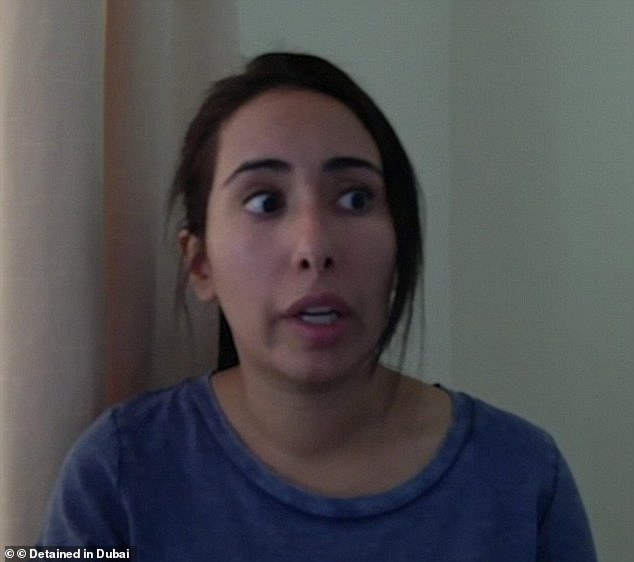 Sources claim Princess Haya fled after learning ‘disturbing facts’ about the Sheikh’s treatment of his daughter Latifa, 33, pictured, who campaigners say is being ‘held prisoner’ in Dubai after a failed escape attempt

Sheikh Mohammed has hired Helen Ward who represented former Formula One chief Bernie Ecclestone in his divorce from his wife Slavica.

The hiring of two of London’s most reputable lawyers indicates the capital is the likely venue for is likely to be one an obscenely expensive and fiercely contested divorce and custody battles in the capital’s history.

Baroness Shackleton is known as the ‘Steel Magnolia’, for her charm and determination, after securing the Prince of Wales a divorce settlement in 1996.

She also represented Sir Paul McCartney in his divorce, and famously had a glass of water thrown over her by Heather Mills.

Baroness Shackleton became a life peer sitting on the Tory benches in 2010 and remains the personal solicitor of Princes William and Harry.

Lady Ward, who works for Stewart’s Law of London, is known for her sharp intelligence and work ethic, previously claiming she worked 17 or 18 hour days ‘if I have to.’

Meanwhile, it was previously alleged that Princess Haya had ‘inappropriate contact’ with bodyguard Russell Flowers.

The former infantry soldier turned close protection officer, who separated from his wife last year, subsequently declined to comment on his friendship with the mother-of-two. 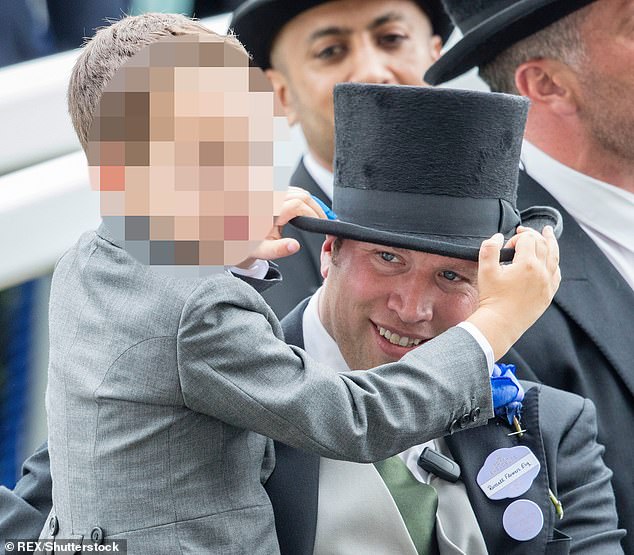 Former infantry soldier Russell Flowers (pictured) is the bodyguard reported to have had ‘inappropriate contact’ with the wife of Dubai ruler Sheikh Mohammed, sparking their divorce 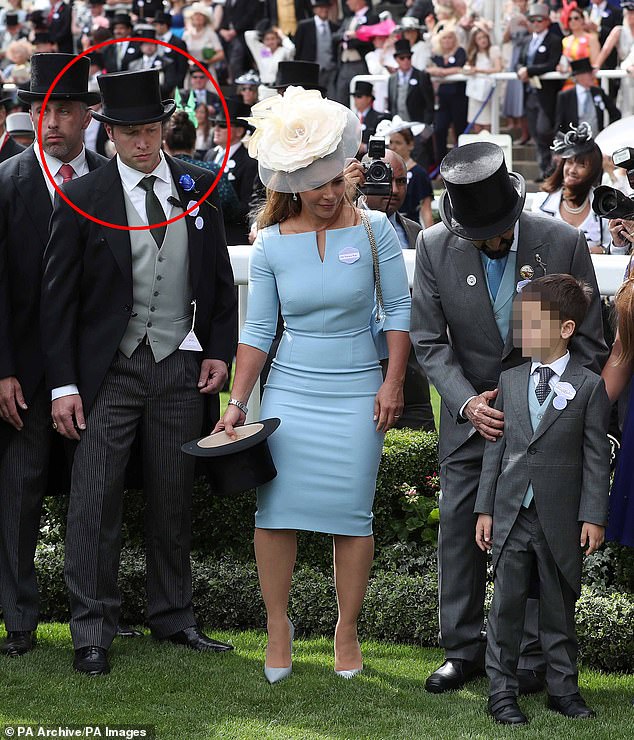 Flowers, a close protection officer (pictured at Ascot last year with Princess Haya and Sheikh Mohammed) worked for the Princess for five years where the pair struck up a close friendship

Asked about the rumoured friendship lasting three years and suggestions that he will be named in divorce proceedings, he said: ‘I have got nothing to say on the matter.’

Mr Flowers, 36, is said to have become too close to the royal during his five-year posting as her close protection officer based at the family’s Dalham Hall Stud in Newmarket and accompanied her around the world.

The friendship is believed to be the reason the Princess has fled the Arab kingdom and is now in hiding in London and awaiting a divorce hearing.

Last year Flowers, for five years a soldier with Princess of Wales Royal Regiment, was pictured with her during the Dubai royal family’s annual visit to Royal Ascot holding her seven-year-old son.

The bodyguard has since gone into hiding after Sheikh Mohammed is said to have been troubled by his apparent closeness to his wife.

Senior members of the royal court in Dubai had expressed their concern over the friendship and brought it to the attention of her billionaire racehorse owner husband.

One source close to the family said the Princess insisted that Mr Flowers accompanied her on every foreign trip.

She is said to have lavished him with gifts and bought him a Range Rover as well as other presents including a £50,000 custom made hunting rifle, Saville Row suits and a watch. The top of the range car is said to have a personalised number plate. 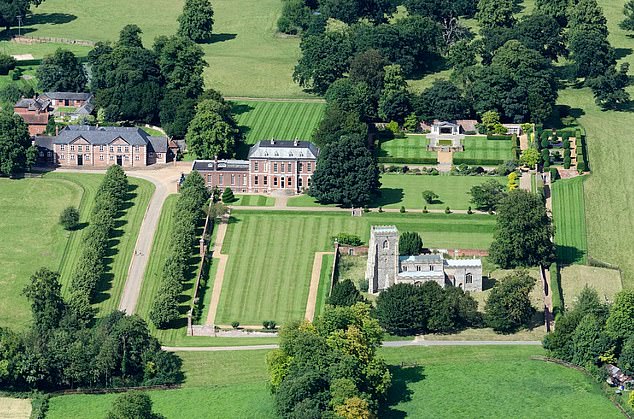 The princess would spend time with the former Infantry soldier at the couples’ stunning 3,000-acre Suffolk home Dalham Hall (above). Mr Flowers lived in his marital home nearby in Newmarket before he separated from his wife last year

Following the break-up of his marriage to his wife, the Princess is also said to have bought a farmhouse to accommodate him in a village near Newmarket, Suffolk, where he was based.

Sources told MailOnline the friendship between Flowers and the Princess was an open secret among the mostly ex-military men who formed the protection team for her and her children aged seven and 11.

After leaving Mayfield College in East Sussex he joined the army and served for almost six years in the 2nd Battalion of The Princess of Wales Regiment from 2003 to 2009.

According to his LinkedIn page he was a Maritime Security Office for two years serving on oil tankers at risk from hijacking by pirates off the Somalia coast.

The Dubai Government owns the Belgravia based security and concierge firm which provides round the clock protection as well as domestic help for the Dubai Royal family at their UK residences.

Battle of the big-money briefs: Ruler of Dubai and his on-the-run wife bring in two of London’s most famous divorce lawyers as they prepare to go war over his billions

By Joe Middleton for MailOnline

The ruler of Dubai and his on-the-run wife have brought in two of London’s most famous divorce lawyers as they prepare to go to war over his billions.

Oxford educated Princess Haya Al Hussein fled the country with her children Jalila, 11, and Zayed, seven, after the break up of her marriage with billionaire Sheikh Mohammed bin Rashid al-Maktoum.

Princess Haya is thought to be living in London at an £85 million mansion near Kensington Palace, and has hired Baroness Shackleton (pictured right), who has represented Prince Charles and Sir Paul McCartney. Meanwhile Sheikh Mohammed has hired Helen Ward (pictured left) who represented Guy Ritchie when he was divorcing Madonna

Meanwhile Sheikh Mohammed has employed Helen Ward who represented Guy Ritchie when he was divorcing Madonna.

The hiring of two of London’s most reputable lawyers indicates the capital is the likely venue for is likely to be one an obscenely expensive and fiercely contested divorce and custody battles in the capital’s history.

Baroness Shackleton is known as the ‘Steel Magnolia’, for her charm and determination, after securing the Prince of Wales a divorce settlement in 1996.

She also represented Sir Paul McCartney in his divorce, and famously had a glass of water thrown over her by Heather Mills.

Baroness Shackleton became a life peer sitting on the Tory benches in 2010 and remains the personal solicitor of Princes William and Harry.

Meanwhile Lady Ward, who works for Stewart’s Law of London, is known for her sharp intelligence and work ethic, previously claiming she worked 17 or 18 hour days ‘if I have to.’

Lady Ward was also represented Bernie Ecclestone in his £2bn divorce battle with ex-wife Slavica, at the High Court in 2009.

American journalist is killed in Ukraine