Think 1966, and the helpful Russian linesman. Germany are still arguing the validity of that one 53 years later. Next up, Jonny Wilkinson in 2003. From leading 14-5 against Australia in Sydney at half-time, to 14-14 when the final whistle blew and 20-17 ahead from what was pretty much the last kick of the match.

And then this. The first Cricket World Cup to be decided by a super over, an outcome so expected and familiar, commentators were receiving crash courses in how it worked seconds before returning to the microphone.

Actually, the super over didn’t even end up ranking these teams. It, like the game, was also a tie. Ultimately, England won the World Cup because they hit more boundaries than New Zealand in their 51 overs combined. We may be hearing more about that means of separation in the aftermath.

New Zealand, do not forget, were the nation who wanted three points for penalties in rugby reduced to one when Wilkinson was at his peak. They won’t be too happy about this, either.

Nor the ricochet that somehow brought England back into a game that, in its final over of what might be termed normal time, appeared lost. Ben Stokes hit Trent Boult for one, went for two, and diving to make his ground, inadvertently diverted Martin Guptill’s throw off his bat and to the boundary rope for four, making six. New Zealand complained that the accident had rendered the ball dead, but that isn’t true.

Stokes had not so much as glanced at the throw as he scrambled to the keeper’s end. He didn’t mean to make contact, let alone score four. This was, indeed, a fluke. And the laws state, in these circumstances, that the ball remains in play.

Look, nobody is saying England didn’t get lucky. But they were haplessly so, not Machiavellian of intent. It wasn’t even a home decision by the umpires. It’s just one of cricket’s strange anomalies. Like a method of tie-breaking the tie-break that came down on England’s side.

England needed 15 runs off the final over at Lord’s to win the World Cup. Ben Stokes and spinner Adil Rashid were at the crease.

1st ball:  Trent Boult bowls a superb yorker that Stokes struggles to get away properly. He manages to get the ball off the square but not much further and there’s no run.

2nd ball: The same story as Stokes tries and fails to heave the ball into the crowd. Instead, he digs down on another yorker and squirts it to extra cover.

3rd ball: An almighty six. Stokes moves outside off and slog-sweeps it into an ecstatic Lord’s crowd. Nine are now required.

4th ball: This is where the drama really unfolds. Stokes tries to launch a full toss but finds Guptill, whose attempt to run out England’s dangerman goes horribly wrong as the ball hits his bat and runs away to the boundary.

5th ball: Another yorker, Stokes has no choice but to run for two. Rashid is run out but a precious run is in the bag and he crucially retains the strike. Two runs required.

6th ball: Pandemonium at Lord’s as England attempt two for the win but it ends with another run out. This time it’s Wood who is out and the game is going to a super over.

Had the competition reverted to wickets taken across 50 overs, as would seem more logical and used to be the case in one-day fixtures, New Zealand would have won. England were all out on the final ball.

Across the other side of the capital Roger Federer and Novak Djokovic were playing another epic, five-set Wimbledon final, yet here every last individual was transfixed on what was, for the most part, a low-scoring, pretty low-quality game of cricket that many were saying might set the sport back two decades by being broadcast free to air.

New Zealand have scored above 250 only once in this tournament and didn’t get there yesterday either — allowing optimists within the environs of Lord’s to speculate that cricket was, quite literally, now coming home.

A reverie that was quickly dispelled as England’s batsmen got bogged down by a slow wicket and a New Zealand bowling attack who have stoically defended low scores throughout the competition.

Jason Roy and Jonny Bairstow could not steer England to their customary 50 for the first wicket and by the time Joe Root was out playing the type of shot that would have embarrassed a tail-end rabbit, it was clear a tense afternoon lay ahead. 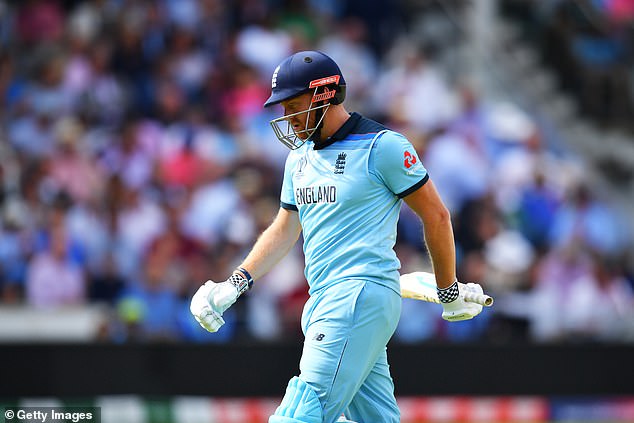 Well, tense perhaps doesn’t do it justice. Think juggling explosive devices. On a tightrope. While trying to catch grapefruits. In your underpants. That kind of tension was what enveloped Lord’s as England’s innings unfolded. It’s the hope that kills you, is the cliche, but on this occasion every ball did for somebody.

Swing and hit: we’ve got this. Swing and miss: we’re doomed. It wasn’t just that England lost valuable top-order wickets, but that New Zealand’s bowlers had them trapped in a slow, sapping, grind to oblivion.

The run rate edged up and even the coming together of Stokes and Jos Buttler for a century partnership could not fully dispel the feelings of disquiet. If one of them fell, it was whispered, the World Cup could be lost again.

Then one of them did. Buttler holed out to substitute fielder Tim Southee at deep cover, leaving England needing 46 runs off five overs. Attainable, but far from guaranteed.

And each time a boundary was hit from there, spirits lifted, and folk danced in the aisles and, yes, that did include some MCC members. And then, every time a wicket fell — and plenty did in this furious climax — shoulders sagged, and spirits dampened, and pessimists concluded that, once again, England were to fall short in a World Cup final. 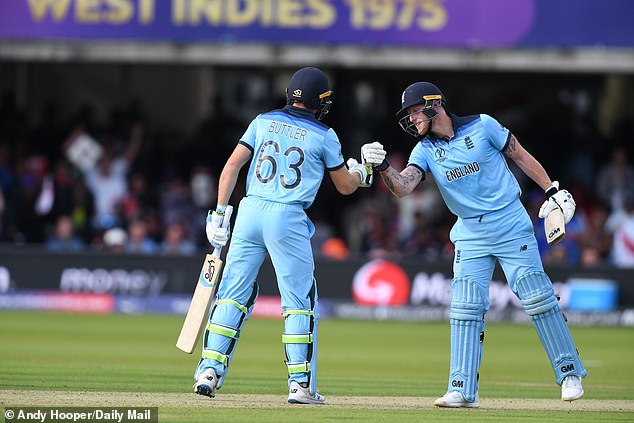 Three, to here —including one on this very turf. Yet losing to New Zealand with the supposed best one-day side in the world was going to hurt most of all. And then the boundary would be breached and it would be concluded that, hey, these boys might do it after all. It was a lunatic, schizophrenic existence. One moment up, the next down. Was it like this in 1966?

Sir Alf Ramsey, it is said, told the players after 90 minutes that they had won the World Cup once, now they had to go out and do it again, so there must have been some see-sawing of emotions. There certainly was in 2003, when all the momentum seemed to be with Australia going into extra time, until Wilkinson achieved timely clarity of purpose.

Maybe that’s the only way to win a World Cup: in a maelstrom of emotion and energy, and fear, and elation. And there were no reports of casualties, beyond fingernails bitten to the quick, of bladders breached by those who steadfastly refused the call of nature in case they missed a single moment.

The maths grew easier too, as it always does in one-day cricket; 59 off seven — oh come on, who knows sevens — became 24 off two and eventually 15 off one. And when Stokes struck Boult’s third for six — and then got the ricochet six next ball — well Lord’s momentarily turned into Box Park a year ago, minus the beer showers because, come on, it’s cricket and we’ve got standards. 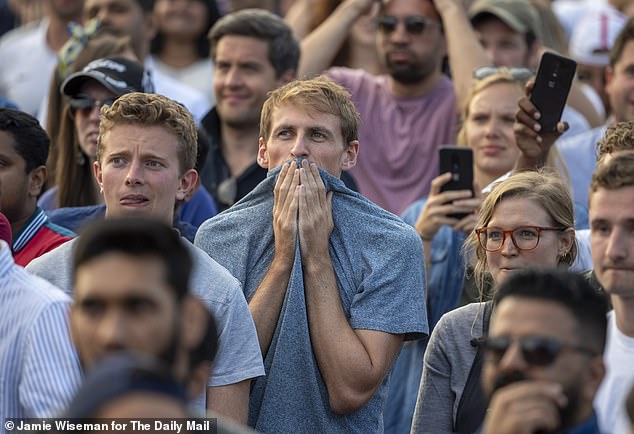 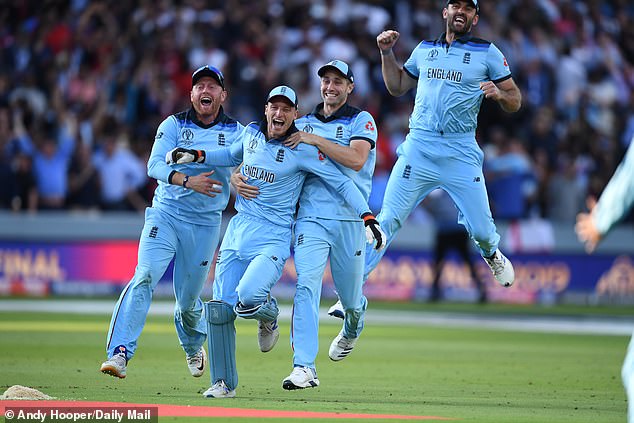 Yet New Zealand tied even the brilliant Stokes down in those final deliveries to force the World Cup’s first super over, a concept that wouldn’t even have crossed the minds of those who first drew up the rules for this competition five decades ago. And again, it was won and lost and won and lost.

Won as Buttler and Stokes took eight runs off Boult’s first three deliveries; lost as just three were hit from the next two; won when it became apparent that New Zealand would need 16 off six balls for victory and Jofra Archer had never conceded that many in a one-day game; lost when he served up a wide from his first ball, a six from his third, and Roy misfielded from the fourth.

And then, with the final play, deliriously, thrillingly, delightfully, won again: with no returns this time. Roy the fielder, stopping the second, the scores tied 15-15, everyone in the ground now aware that this meant England would be world champions.

The players were haring around the field in celebration as fireworks exploded, and the giant screen relayed the message: decision pending. One more gut-churning twist? Not this time. It wasn’t the greatest throw, but Guptill was out. Way out. And England were home. Way home. Like cricket, at last.

Why should we foot BBC wages, writes an outraged MARTIN BELL
Amazing photos capture insects covered in dewdrops that look like beautiful jewels
Jessica Alba's Twitter account hacked and flooded with bigoted posts late at night
Serena Williams plays at Wimbledon after joking that she would miss Archie's christening