A British zookeeper has shared a fond reunion with an elephant he cared for more than 30 years ago.

Peter Adamson was instantly recognised by his old friend Kirsty, an Asian elephant who lived at a Glasgow zoo in the 1970s and 1980s.

Mr Adamson was a keeper at Calderpark Zoo and looked after Kirsty before she moved away in 1987.

He had lost track of her when she left Scotland but recently discovered that she had moved to Germany and arranged to go and visit her.

Back in the day: Peter Adams with the elephant Kirsty at Glasgow’s Calderpark Zoo in the 1980s. Kirsty moved away in 1987 but the pair have been reunited more than 30 years later

Good to see you: Peter Adamson is reunited with Kirsty, who zookeepers said recognised the Scotsman by the sound of his voice, at Neunkirchen Zoo in Germany

The two shared a warm hug at their reunion in Germany as Mr Adamson stroked the elephant and Kirsty curled her trunk around him.

Mr Adamson said: ‘Of course, I was wondering if there was any truth to the phrase “elephants never forget”.

‘That she allowed me to get close and accepted me was a very emotional experience for me. I will always keep that memory in my heart.’

Zookeepers said the elephant had probably recognised her former minder by the sound of his voice.

Happy reunion: The Scottish zookeeper is delighted as Kirsty the elephant wraps her trunk around him after she recognised his voice from more than 30 years ago 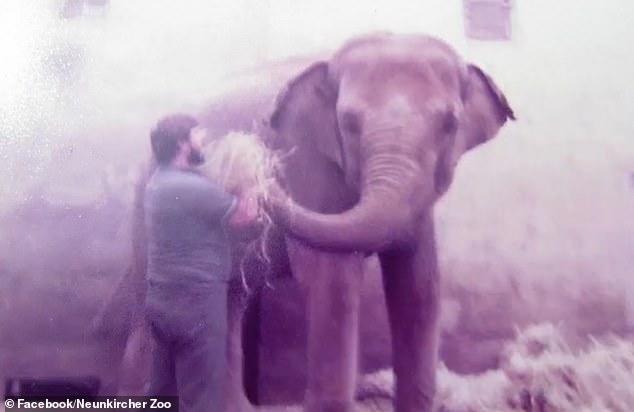 Best friends: Kirsty and Md Adamson in the 1980s when the former zookeeper revisited the elephant

The Scotsman said he will try to visit Kirsty as much as possible now he knows where she lives.

Kirsty, born in 1967, has been living in Neunkirchen Zoo in the western state of Saarland since 2005.

After leaving Glasgow she had moved to Chester in north-west England where she met her female companion Judy for the first time.

The pair later moved to Dublin where they lived together from 1994 until 2005 until finally being shipped to Germany. 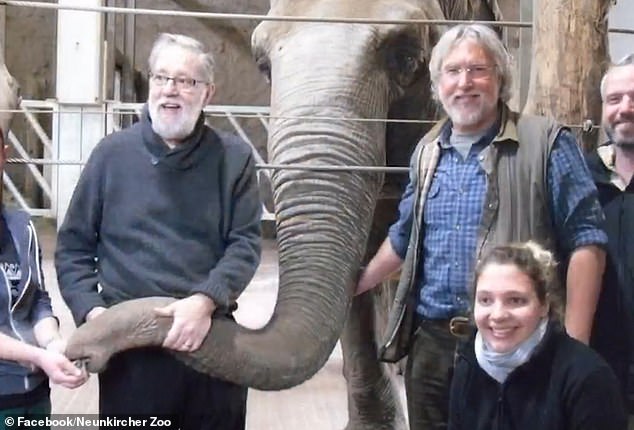 Happy family: Mr Adamson with Kirsty and others who attended the reunion at Neunkirchen zoo 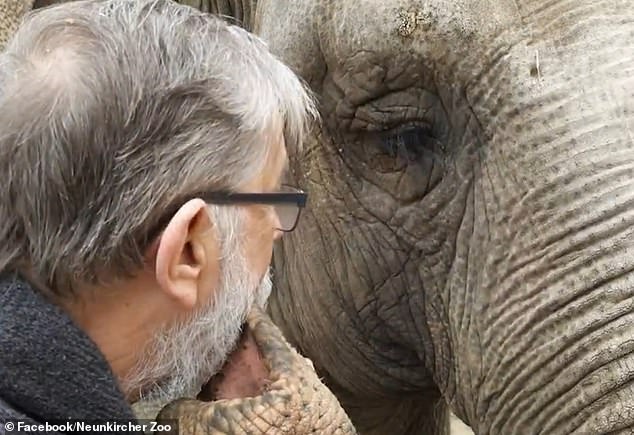 Eye to eye: Mr Adamson gets a close-up look at the animal he used to care for but had not seen for more than three decaces

‘After a colourful life with several moves around European zoos she has found her retirement retreat with us,’ her current zookeepers said.

The zoo’s website describes her as ‘intelligent and willing to learn’ but also ‘dominant over members of her species’.

Mr Adamson had found Kirsty’s whereabouts by searching online and made contact with the German zookeepers through friends in the city of Trier, the zoo said.

Calderpark Zoo closed in August 2003 after running up huge debts.