“This Was the Last Straw”: State Staffers Fume as Pompeo Backs Trump in Shutdown 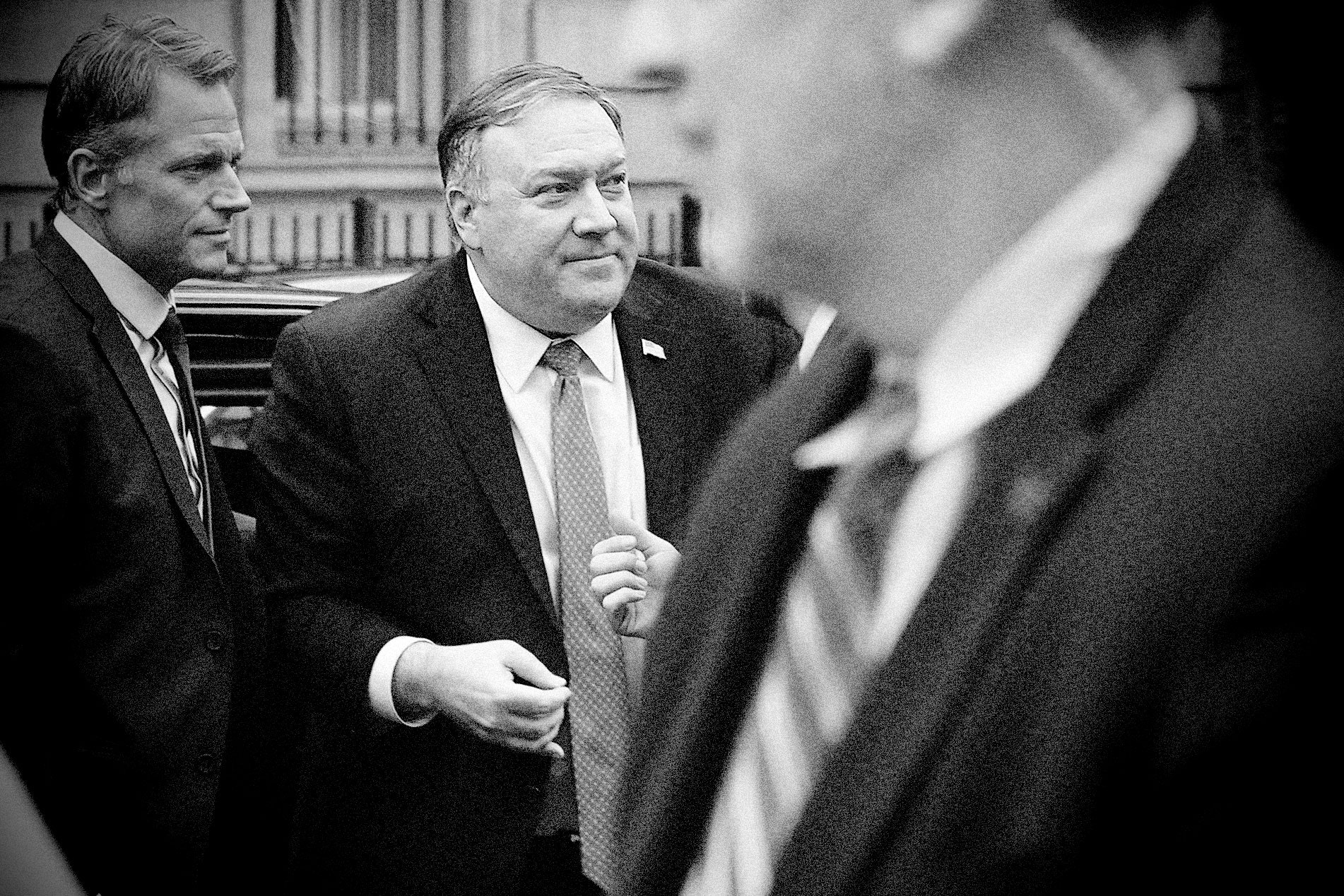 “This is bullshit,” a senior State Department official messaged on Thursday, shortly after the Trump administration announced that all United States diplomats and department employees were to return to work next week, despite an ongoing government shutdown that has deprived some 800,000 federal employees of a regular paycheck. Earlier that afternoon, Bill Todd, the deputy undersecretary for management, had sent out an urgent memo elucidating the rationale. “As a national security agency,” he wrote, “it is imperative that the Department of State carries out its mission.”

For staffers who were already frustrated with their newish, Trump-loving boss, Secretary of State Mike Pompeo, being forced to work without pay has felt like a last straw. “It just further destroys morale . . . It demonstrates a continued lack of respect, even apparent enmity, for people committed to the national security of the country, only in order to serve a political calculation,” one current State Department staffer said. “It’s like, we’re supposed to show up and pretend like everything is cool? Work as normal?”

According to Todd’s memo, the State Department “is taking steps to make additional funds available to pay employee salaries”—at least for one pay period. But among diplomats I spoke with, the news did little to dampen the fury within the diplomatic ranks as the shutdown stretches into its fifth week. To begin with, the memo hardly lifted the cloud of financial uncertainty in Foggy Bottom and at U.S. embassies abroad. State Department employees won’t be paid for any work they have done since the government was officially shuttered at midnight on December 22 until after Congress and the president strike a deal. Around 42 percent of State Department employees in the U.S. and 26 percent of the workforce abroad were furloughed in December. And there is no guarantee that department employees will continue to get paid after the first set of paychecks are doled out on Valentine’s Day. “They are still holding the two pay periods hostage until the shutdown is over,” the State staffer told me, exasperated. “How are you supposed to feel good about it?”

Perhaps even more important than the paycheck, however, is what the shutdown has symbolized for America’s diplomatic corps. Current and former State staffers I spoke to were particularly upset by Pompeo’s decision to bring his wife, Susan, on his trip in the Middle East last week, even as some diplomats were filing for unemployment benefits or working unpaid overtime to manage the workload. “I don’t like it because no matter what you do, the wife needs staffing,” a former U.S. ambassador told me. “During a shutdown, it is just totally inappropriate.” (Pompeo defended the decision, saying Susan is a “force multiplier.”)

Pompeo also chose to move ahead with a conference for all U.S. chiefs of mission and U.S. ambassadors that started Wednesday, guaranteeing extra work for unpaid State Department staffers. During a senior staff meeting the previous Friday, they were told to bring in as many bodies as needed to put on the event, according to one source who estimated the number could be in the hundreds. (A State Department spokesperson defended not canceling the event in a statement to Politico.) Diplomats I spoke to said they recognize the value of a such an event. But as former foreign service officer Brett Bruen explained, “going ahead with this conference just rubs salt into the wounds” of State Department staffers who are going unpaid. “It is a good illustration of this issue that Pompeo is just out there with his own script of how rules should be applied whether it is during the shutdown and he gets to have this conference or whether it is his wife who gets to travel around and do these trips.”

Together with his unceasing praise of Donald Trump, Pompeo’s perceived cavalier attitude toward the shutdown has made some staffers feel like they have been taken for granted—or worse, been taken advantage of. “What is universal is a sense that they are pawns in a bigger political dynamic,” said Rob Berschinski, a former deputy assistant secretary of state still in touch with former colleagues. Several State Department insiders noted the high hopes they had for Pompeo when he replaced Rex Tillerson, who was widely seen as ineffective. “Unfortunately, the kind of cynical predictions at the outset have proven themselves to be not necessarily cynical but to be perceptive and accurate,” the senior State Department official told me. “Where Tillerson just eschewed the expertise of the building, Pompeo acts like he cares but doesn’t actually listen to people or care to.”

Last week in Abu Dhabi, Pompeo tried to paint a happy face on the discontent within his department. “Morale is good,” he told reporters during his nine-nation tour of the Middle East. “They understand that there are squabbles in Washington, but their mission remains, their duties continue, and they’re executing them.” When his comments made it back to the States, however, some diplomats protested. “The shutdown has directly impacted several high level initiatives that we were planning, everything is being postponed and morale is affected throughout the dept,” one State staffer complained. Another current State employee wrote in a text message, “I can’t tell you how disappointing he has been during the shutdown,” arguing that Pompeo failed to show “empathy” for the staff. “I was really giving him the benefit of the doubt,” this person continued. “But someone’s true colors begin to show when times are tough.”

While Pompeo thanked staffers for their work and patience during the shutdown in a letter last week, he also defended Trump’s insistence on a border wall—even at the expense of his employee’s salaries. “I realize the lapse in appropriations adds even more challenges and complexity, both professionally and personally,” he wrote. “But we face a serious humanitarian and security crisis, and the President is working to secure our southern border and bring reforms that will ensure the safety and security of the American people.”

The senior State Department official described the letter as “patronizing” and fumed that Pompeo—who continues to receive a paycheck and recently received a $10,000 raise—sided with Trump rather than show solidarity with his colleagues. “Cabinet secretaries, I think, have an obligation to go to Trump and say that this is having a major impact on not only our morale but our ability to do our work,” they told me. “I think that they have an obligation as leaders of departments and agencies to do that. They can’t want this. They can’t just say, ‘Yep, Mr. President, we are going to get it done,’ because that is not the case. We can’t get stuff done if people aren’t there to do it.”

The current State staffer went so far as to express concern that Pompeo’s handling of the shutdown could prompt further departures from the diplomatic ranks, which have been depleted since the Tillerson era. “There was damage enough over the last two years,” they said. “I feel like this was the last straw for a lot of people.”

Watch live: Greta at climate protest in Berlin ahead of key German election

View from The Hill: Barnaby Joyce falls (sort of) into step for the ‘net zero’ march

EU support for reforms in Ukraine is ineffective in fighting corruption

Offshore processing to continue for asylum seekers FILE – In this Sept. 4, 2018, file photo, refugees are pictured on Nauru. Australia aims to remove all asylum seeker children from Nauru within two months as concerns escalate about their deteriorating health after languishing on the tiny Pacific atoll nation for up to five years. But cabinet ministers said on Thursday, Nov. 1, the government is maintaining its much-criticized policy of sending all asylum seekers who attempt to reach Australia by boat to immigration camps on Nauru and Papua New Guinea. (Jason Oxenham/Pool Photo via AP, File)