How 3-D Printing Exposes the Fallacy of Federal Gun Laws

Defense Distributed, an Austin-based company notorious for 3-D printing a gun, recently won its risky landmark case against the federal government, allowing it to host digital gun designs on the internet. Though a federal judge blocked the ruling with a temporary injunction earlier this month, if the company’s legal strategy holds, it verges on mad genius. The reasoning: If a well-accepted First Amendment protects bits in the form of speech and code, and a contested Second Amendment protects atoms in the form of guns, then by turning guns into code (ie, atoms into bits) we get First Amendment protection for guns too.

Antonio García Martínez (@antoniogm) is an Ideas contributor for WIRED. Previously he worked on Facebook’s early monetization team, where he headed its targeting efforts. His 2016 memoir, Chaos Monkeys, was a New York Times best seller and NPR Best Book of the Year.

This Defense Distributed story—with its confusing twists into First Amendment jurisprudence, computer-controlled manufacturing, and 3-D printing (and more on that in a moment)—cannot be fully understood without understanding the past half-century in firearms innovation. This new technology is completely undermining the way we’ve traditional regulated guns, and will overturn our nation’s longstanding political compromise around them.

But first, what is a gun exactly?

The revolver above is my grandfather’s Smith and Wesson .38 Police Special (inherited), once the standard police sidearm. It’s a forged hunk of metal, and close to nothing on it can be modified without serious gunsmithing—and, even then, it’ll never be more than a medium-frame, six-shot revolver.

Let’s fast-forward to the present.

This is a disassembled AR15. It is modular in every way, and every bit of it can be swapped out like so many Legos. Whatever your opinions on gun control, the AR15 is a masterpiece of open source, modular design—by changing out a part for one with a similar function but different design, both military and civilian owners can endlessly modify it into almost anything, from a submachine gun to a sniper rifle.

You might ask: If the modern military weapon is just Legos, then what part is the “gun,” the specific piece of hardware with unique rules around sales and ownership that makes it different from, say, a chainsaw or blender?

The federal bureaucrat responds: The “gun” is the thing with the serial numbers on it. In the case of AR-pattern rifles, that’s what’s known as the lower receiver (or just “lower”). It’s the lower part that encases the rifle’s action, where the pistol grip attaches and a magazine goes in.

Everything else is an accessory, even though it actually does the work of a gun, namely loading a cartridge into the action, striking the primer, which ignites the gunpowder, launching the projectile and hot gasses out of the barrel, and, finally, getting ready to do so again.

This is the official “gun” part of an AR. Everything else is really, truly, not considered a “gun.”

Particularly in light of the initial discussion around advanced manufacturing, you might ask: If the “gun” is this relatively small piece of metal or polymer, then why can’t I make it myself somehow?

Let’s answer that via a thought experiment:

Say I took a rectangular hunk of aluminum and machined out a hole like the magazine well of the AR.

Then I machined out the trigger opening.

Then I machined out the base where the pistol grip attaches and every other detail in the “gun” part (see graphic).

At what point did the hunk of metal become a “gun”?

This isn’t mere philosophizing. It’s a real issue in gun regulation. The federal bureaucrat responds again: That piece of aluminum became the “gun” when you got 81 percent of the way to finishing it. After that point, it must be bought and sold as a gun, with all the restrictions that apply.

What does the enormous US market in gun parts do? It sells you an 80 percent finished piece of metal, which is officially not a “gun” (though it really looks like one) on the internet, no questions asked (link provided for reference, not an endorsement). This is known in the gun world as an “80 percent lower.”

The aspiring unregistered gun owner then finishes the last 20 percent at home, with a drill press and/or a milling machine. Combined with the “non-gun” parts bought freely online, they now have a fully functioning AR15. Nobody knows that gun exists, and it is completely untraceable.

Some retailers (such as the one linked above) offer you the entire package: every non-gun piece required and an 80 percent finished “gun” (again, really just the lower receiver), plus they’ll even include some machining jigs to make the finishing easier. This is the IKEA model of firearms, which even has its own IKEA Effect: New gun owners feel disproportionately attached to a gun they “made,” even though really they just put it together, often with the same hex keys you’d use on an IKEA bookshelf. Anyone with a credit card and address can buy this, and nobody on the planet is the wiser, save the retailer, who is not required to report anything, since they’re just selling “accessories.”

The entire gun debate is really about that last 20 percent of the bureaucratic “gun,” and how and where it happens. This is where Defense Distributed really comes in. They sell you a gadget that makes that last 20 percent step easier than doing it yourself, via a computer-controlled milling technology that’s been around forever. It isn’t a fundamentally new gun technology, but it is an important last-mile advance.

I mention 3-D printing nowhere. That’s because it’s irrelevant, and most of what you read about 3-D-printed guns is noise. 3-D printing is a relatively immature manufacturing technology, and it won’t be making a modern, repeating firearm any time soon. (At least not the home 3-D printers that are cheaply available.) The only reason 3-D printing is even in the story is because Defense Distributed, geniuses at marketing, created a toy 3-D-printed product that could fire one round (before maybe exploding in your hand) as a way to plant the meme in the heads of people (and politicians) who know nothing about guns.

So why is everyone freaking out, including the attorneys general of several states that are suing Defense Distributed to stop? First, they are misunderstanding the technology, and believing Star Trek replicator fantasies around 3-D printing and guns. Second, and more seriously, advances in gun modularity and manufacturing now make most gun regulation obsolete.

To understand why technologies like those of Defense Distributed are poised to make gun regulation obsolete, we have to understand how gun regulation historically worked. In states like California and New York that wish to limit access to dangerous weapons, regulation has focused on certain features associated with military-style firearms, like pistol grips, quick-release magazines, folding stocks, and so on. In a world where guns were largely static and hard to modify, and the existence of such features indicated whether they were destined for sporting or military use, this approach made sense.

With this new modularity of firearms, this has essentially already happened. Consider the .50 Barrett M107 sniper rifle. You may have seen the weapon in 2010’s Academy Award for Best Picture winner, The Hurt Locker, where it’s used by US soldiers to eliminate Iraqi snipers from an astonishing distance. It fires a projectile the size of your thumb, and can kill a man from over a mile away. In spirit, the weapon is illegal in California. In actual fact, it’s legal with the right modifications that only slightly impact functionality. Gun regulation fails.

Why does this odd status quo exist?

Our current gun laws are a necessary compromise among pro- and anti-gun extremes, plus a large middle that wants some gun control but not an outright ban. The NRA zealot is placated by Democratic rhetoric around banning only “weapons of war” paired with the technical knowledge that they can tolerably dodge most Blue State gun laws via the modular technology described above. The pro-gun-control Blue Staters are placated because politicians are “doing something,” and thanks mostly to ignorance about how modern guns work, think their gun laws are actually stopping the distribution of firearms when they increasingly resemble security theater.

Defense Distributed’s ultimate goal is to kick the final, weak leg out from under this tenuous political agreement, and force a reckoning with the state of firearms technology. When the last-mile problem of untraceable, unregistered guns has finally been “solved,” even politicians can’t maintain the charade of effective gun control.

Whether Defense Distributed manages to spark the conflict now or advancing technology eventually sparks it later, this country will come to a total impasse on guns in which the existing compromise becomes untenable. What then?

Foundational ideological conflicts in this country have always been resolved by one side co-opting some feature of the federal government (for example, the US Army, the Supreme Court, ICE) to force the other side to accept its interpretation of the Constitution. Depending on the party in power, both Democrats and Republicans have attempted just that, such as by tightening gun laws via the Federal Assault Weapons Ban signed by Bill Clinton or, more recently, through failed attempts by House Republicans to expand concealed-carry rights nationally.

Alternatively, faced with this and other divergent opinions on key issues like abortion and immigration, the union reverts to a pre–Civil War level of federalism, where the US becomes a loose association of states, and every state goes off their own constitutional interpretation. In that scenario, the Blue States pursue the gun-banning strategy, turning themselves into a US version of Canada. Their pro-gun residents will rail online about “From my cold, dead hands!” and then quietly move elsewhere (to some extent, this is already happening). The pro-gun states will maintain their pro-gun stance, whatever the gun violence rates may be.

It’ll be weird and inconsistent, but we’ll prefer this new awkward compromise to the alternatives: “Calexit,” another Civil War, or the dissolution of the 242-year-old experiment in democracy we call the United States of America. 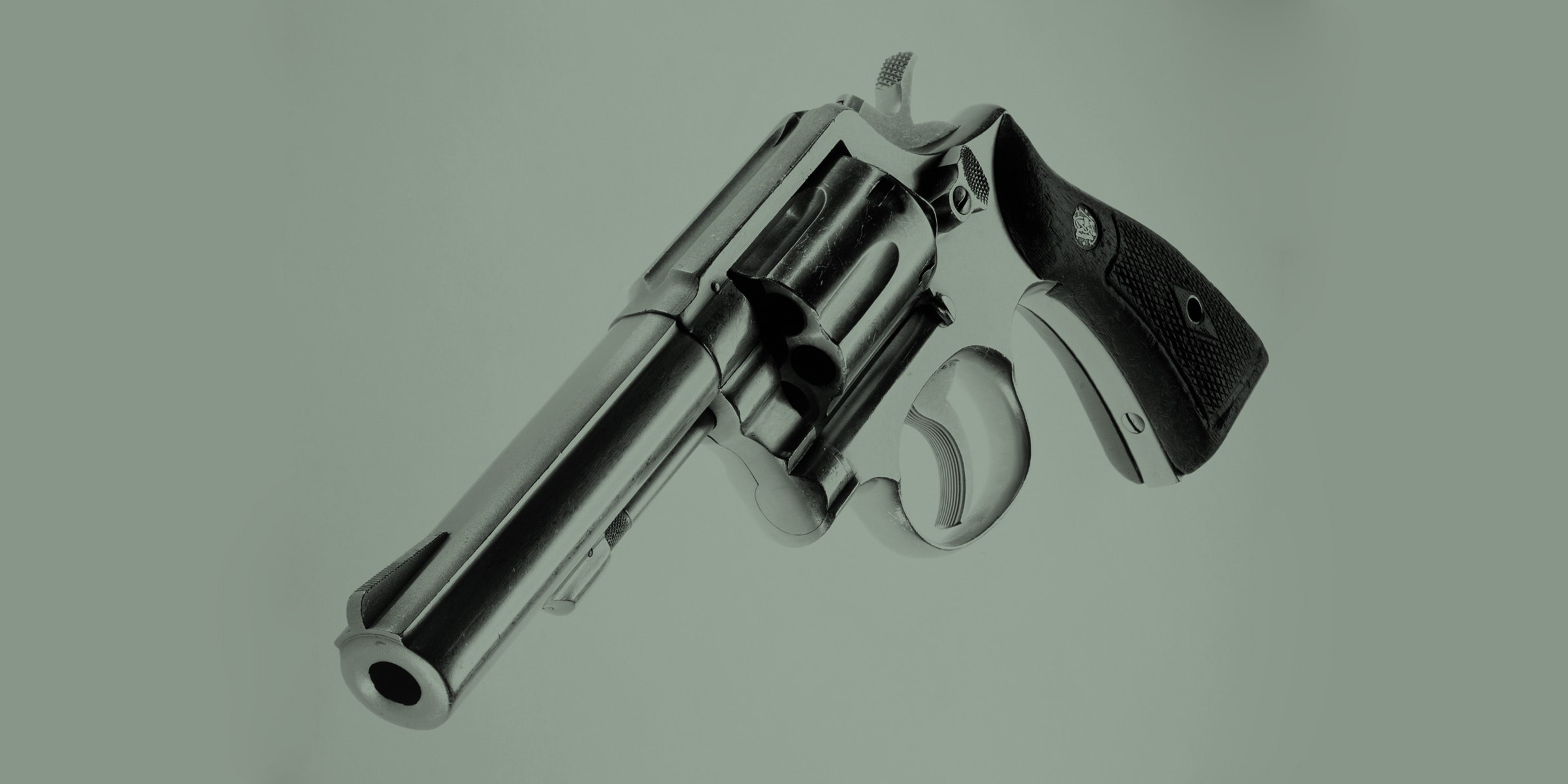