The Amazon Echo kicked off the smart speaker trend a few years ago, but it’s no longer alone. There are dozens of smart speakers already on the market in 2018 and more are coming. Picking the best smart speaker for your needs isn’t always simple, though.

You need to decide which voice assistant you prefer (there are now four—Alexa, Google Assistant, Siri, and Cortana) and what features are most important to you. Is music quality highest? Does it need to play Spotify? Do you want a screen with your voice control? Does it need to connect to your other speakers and smarthome gadgets? Below, we’ll try to help you answer them by highlighting our favorite smart speakers for a number of special use cases no matter whether you prefer Amazon, Google, or if you want to know how Siri and Cortana stack up to the rest.

There are speakers that can pump out tunes louder, and others that are more portable, but no smart speaker is a better buy than the Sonos One right now (8/10, WIRED Recommends). It sets the bar in a number of areas, including sound quality, multi-room audio, and smart home compatibility. Plus, it’s probably compatible with whatever ecosystem you prefer—it comes with Alexa enabled, but also supports Apple Airplay 2 and upcoming software improvements will add Google Assistant.

On the audio front, the Sonos One is virtually unrivaled. Apple’s HomePod is the only speaker we’ve heard that may best it in sound, but not by much. It connects to about 100 different audio services around the world (most of them), and is the only smart speaker that can seamlessly pair with a ton of other speakers or join a home theater setup.

If you’re going to buy one speaker, the Sonos One will bring your home the most joy (and jams).

Buy the Sonos One for $199 on Amazon or Sonos.com

Out of all of the smart speakers I’ve used, the sheer convenience and usability of the JBL Link 20 ((8/10, WIRED Recommends) have made it my favorite. The Link 20 is waterproof and floats. It also has helpful indicator lights showing you how much battery is left and how strong your Wi-Fi signal is, both important when you’re moving a speaker around the house (or in the backyard). Pairing via Bluetooth is also easy and I like that you can charge it while it stands upright, something that requires an adapter on the rival UE Blast and Megablast speakers.

The Link 20 relies on Google Assistant, which works better than Alexa in many ways. Setup is easier and there are rarely any weird syncing issues (common with third-party Alexa devices). It answers questions more reliably, and is compatible with Google apps and Spotify, Pandora, and YouTube Music for streaming. Google Assistant can now play Netflix on your Chromecast devices, too so you can fire up your latest favorite show with a simple voice command.

The Sonos Beam (8/10, WIRED Recommends) is a lot like the Sonos One above, but it’s a compact soundbar made to connect to your TV. It has Alexa and Airplay support (with some Siri) out of the box and Google Assistant is coming, but the real benefit is how seamlessly it can connect with other Sonos speakers. You can easily connect two other Sonos speakers for surround sound, or add a Sonos Sub to the mix.

The Beam isn’t the absolute best soundbar on the market (the Sonos Playbar arguably sounds better), but it’s good enough for most living rooms and its compact size makes it usable for many size TVs. If you own a Fire TV, it can play movies and TV shows with voice requests, and will likely gain new abilities when Google Assistant is added.

Buy the Beam for $399 on Amazon or Sonos.com

4. Best for the Kitchen

Lenovo’s Smart Display (8/10, WIRED Recommends) is the first Google Assistant speaker to pack a screen. It’s a lot like Amazon’s Echo Show, and basically just adds a small visual element to your voice searches, letting you use a touchscreen if you’d like. It’s especially good at recipes, with a built-in database that lets you search through recipes and go through them step by step at your own pace (dummy proof).

Other notable skills include the ability to Chromecast videos to it, pull up YouTube videos with voice, and make video calls over Google Duo. It also looks beautiful, coming in 8-inch and 10-inch sizes, with a nice bamboo design on the larger version, and solid sound (though it’s no Sonos). The built-in camera lens cover also brings us some comfort.

Buy the Lenovo Smart Display for $200

5. Best Alexa Speaker with a Screen

We currently prefer the Lenovo Smart Display, but the Echo Show (7/10, WIRED Recommends) is a great Alexa-powered alternative. It sounds better than the other Echo speakers, and it’s more usable than third-party Alexa speakers because it can call and network with other Echo speakers.

The screen is where it shines. You still have to talk to Alexa to do almost anything, but the screen lets you see what music you’re playing, pause, or skip tracks, and even view lyrics on some Amazon Music tracks. It can also play Amazon Prime videos and has a video version of Alexa’s daily flash news briefing. Voice and video calls are supported, though to do video, you’ll need to call another Echo Show.

If you aren’t in it for the music, the Amazon Echo Dot and Google Home Mini (7/10, WIRED Recommends) will give you most of the perks of owning a smart speaker, and you can use them to smarten up existing speakers on the cheap. We prefer the Google Home Mini because, well, we like Google Assistant a little better at the moment, and its smart home compatibility continues to grow.

The Home Mini can tell you the weather, play white noise for you, answer your random questions, and has more contextual awareness than Alexa. It’s also an easy way to get a Google speaker in the rest of your home, so you can ask questions in rooms where you don’t usually listen to music.

Buy Home Mini for $49 on Walmart or Google’s Store

(For Alexa, the $50 Echo Dot is still the best mini speaker.)

If you’re looking for a smart speaker that can crank it out in any sized room, the Google Home Max (8/10, WIRED Recommends) is our pick. It gets loud and brings the bass, thanks to its two 4.5-inch woofers. Touchpad volume controls work well and we also like the magnetic pad on the bottom, which keeps the speaker from sliding around, and prevents the speaker from rattling against whatever table you have it set on—keeping those beats extra tight.

The Max also smartly amplifies and reduces its bass based on the room you’re in, thanks to its array of six microphones, and gets about as loud as a Sonos Play:5 speaker, though it’s not quite as clean and balanced as the Sonos One. But if you like to rock out and kick up the volume, it’s fairly unmatched. If you’re completely nuts, you can pair two of these together. Like other Google speakers, setting up the Home Max is easy.

Buy Home Max for $399 from Walmart or Google

JBL’s Google Speakers Work Really Well: The other Link speakers are almost as good as the Link 20 (recommended above), depending on your needs. The $95 Link 10 is a solid alternative with 5 hours of battery life. The $195 Link 300 and $300 Link 500 are also solid picks, though the 300 and 500 require a power outlet.

Polk Command Bar is the Alexa Soundbar: The Polk Command Bar (7/10, WIRED Recommends) is a great $299 soundbar that comes with a subwoofer. It’s an excellent bargain for the price, and the Alexa integration is solid. If you don’t go with the Sonos Beam we recommend above, try this.

UE Blast and Megablast Are Also Awesome: The UE Blast and larger Megablast (8/10, WIRED Recommends) sound even better than the JBL Link speakers, are also waterproof, and have better battery life. Unfortunately, they only use Amazon Alexa. The Blast costs $106-$180 and the Megablast costs $199-$250. Buy them with the charging dock.

Harman Kardon Allure Brings the Bass: The Harman Kardon Allure (7/10) is not for everyone. It’s bulky, has lights on it, and looks like an egg…but it also spits out wicked bass. Just keep in mind that it’s an Alexa third-party speaker, so it may have some compatibility issues if you already own other Alexa speakers. The Allure costs $200.

Other Smart Speakers: Don’t buy them solely for their music quality, but the standard Google Home ($129), Amazon Echo 2 ($100), Amazon Echo Spot ($130), and Amazon Echo Plus ($165) do get the job done. The Echo Plus sounds the best of the bunch. They’ll play music well enough that you won’t cringe, but keep in mind that you’re getting what you pay for with their more affordable prices.

What about Siri and Cortana?

Apple has finally released its first Siri speaker, the HomePod, and believe it or not there is a Microsoft Cortana speaker out there too from Harman Kardon. They aren’t our top picks, but are they any good?

Apple HomePod for Apple Junkies: Apple’s one and only Siri speaker sounds fantastic, but it’s only for people who live a complete Apple life. It only works with Apple Music yet costs $349 on Apple’s store. Read our full review to see if it’s a good pick for you.

Harman Kardon Invoke is (Kind of) a Steal: The Invoke (7/10) relies on Microsoft’s Cortana voice assistant. She’s … not super popular. But that doesn’t mean she doesn’t work. Cortana doesn’t have a lot of smart home compatibility, but it does work with Spotify and some other services, and is the best speaker for Skype. It can also tell you the weather and do all the basic tasks other assistants can. Did I mention that it’s a speaker that sounds twice as good as its price? The Invoke is only $100 from the Microsoft Store.

Why We Prefer Google Home Speakers (For Now)

There are a lot of reasons to love Amazon’s Alexa voice assistant, and honestly it works pretty well. If you want to use your voice assistant to shop or use Amazon services, chances are an Alexa-powered speaker is best for you.

Google Assistant has fewer skills and compatible smart home devices than Alexa, but it has enough that it’s useful, and Google is adding new skills at a rapid pace. We’ve found that speakers with Google Assistant work better together and are compatible with a wide variety of Google apps and services. Google is better at answering random questions and telling you where to go out to eat, since it can access and send information to your phone through Google apps.

Spotify, Pandora, Google Play Music, and YouTube Music are the main ways to play music with Google Assistant, covering most of your bases. The service can also send Netflix shows and movies to your TV if you have a Chromecast attached.

Should You Wait to Buy?

Now is a great time to buy any of these speakers. There will likely be a new batch of Echos at some point in 2018, along with more smart soundbars and speakers with screens, but our picks should remain pretty steady for a while. The good thing about these smart speakers is that most of them should last several years, at least since many of the improvements have to do with the services powering each digital assistant rather than the hardware. Sonos is known to keep its speakers working for more than a decade, so if you’re worried about longevity, opt for them.

When you buy something using the retail links in our stories, we may earn a small affiliate commission. Read more about how this works. 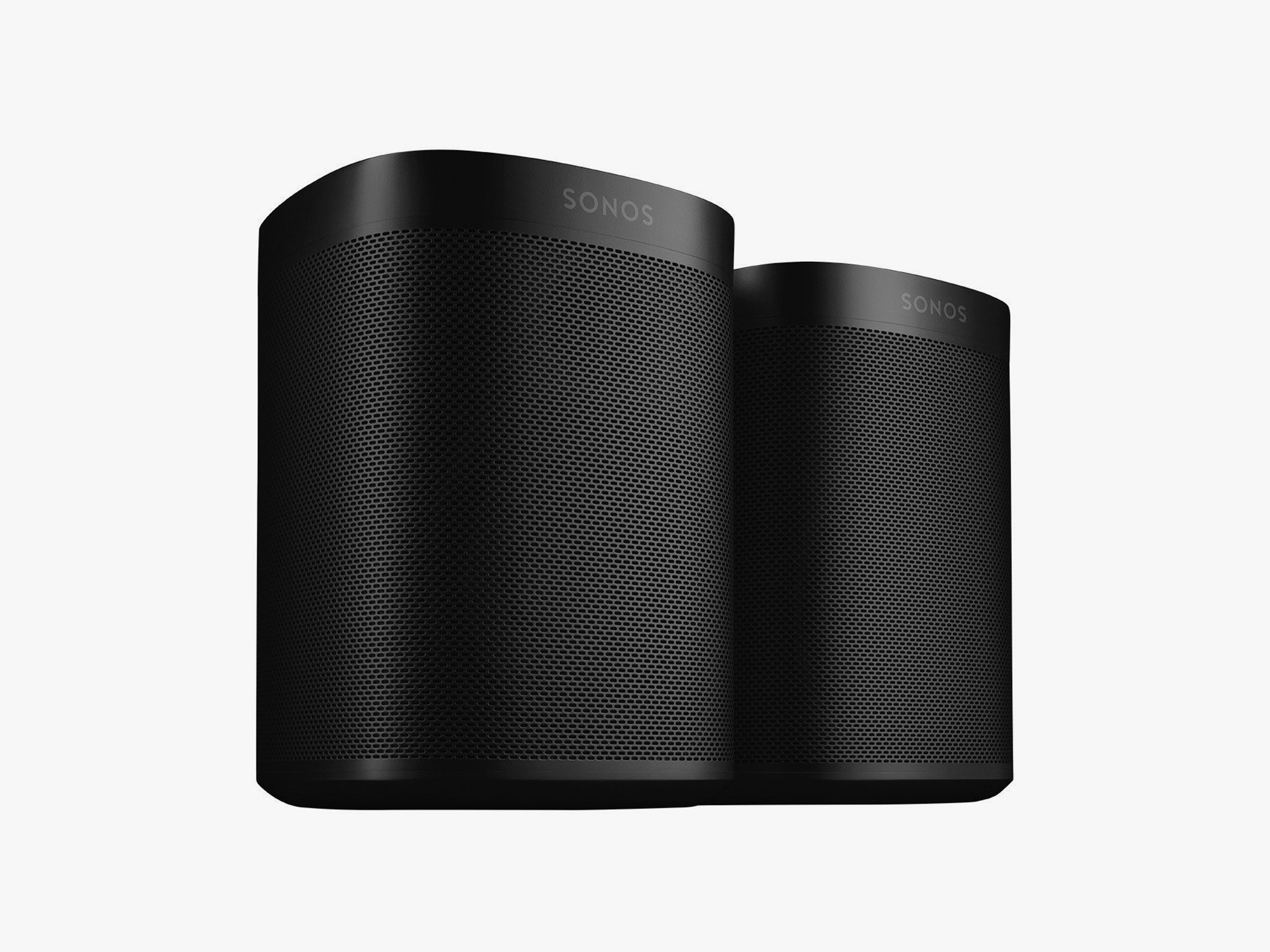